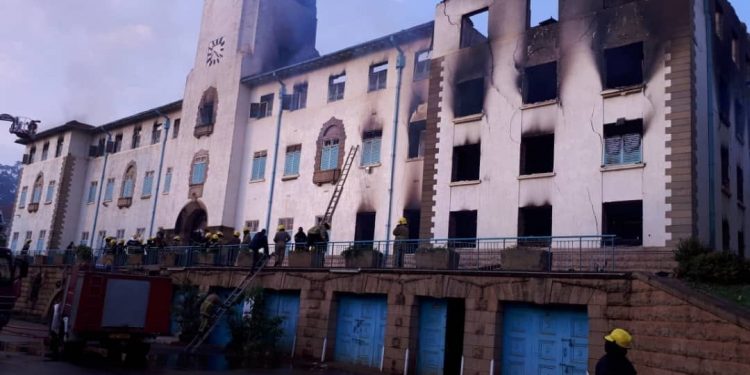 Over the weekend grief and shock engulfed the nation as the historical building of Makerere University Ivory Tower caught fire. While appearing on the national Broadcaster UBC, the institutes’ Vice Chancellor Prof. Barbanas  Nawangwe who happens to be an architect revealed that no building in the University is insured and around Shs20b will be needed to reconstruct the Ivory Tower.

According to the VC, the valuation of the Ivory Tower before the fire was Shs.15b and given the fact that most of the walls are cracked because it was built using old technology, new technology will be required to reconstruct it.

“I believe if we are to rebuild the Ivory Tower even if part of the building like the main hall wasn’t damaged, we can’t use less than what the building was valued to be. We shall probably need Shs20b,” said Prof. Nawangwe

Prof. Nawangwe also said that there are no columns in the building and most of the walls will have to be brought down to introduce columns and beams.

He also said that aside from the investigations going on to establish the cause of the fire, they are also investigating the structural integrity of the building and most of the buildings will be brought down.