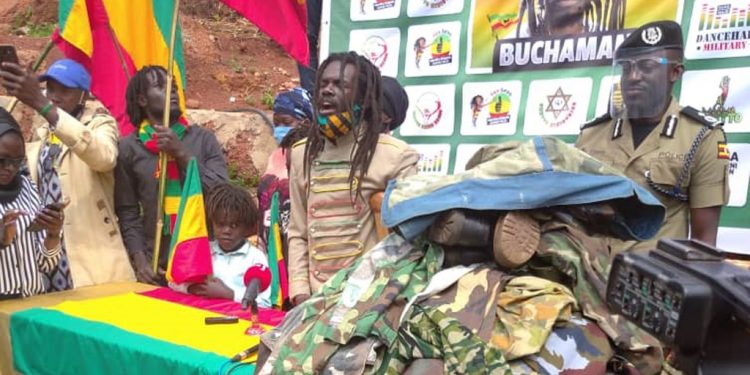 As National Unity Platform is still lamenting about the police raid that saw the force confiscate NUP attires that resemble the Military Uniform, Buchaman has today handed over his attires to police and immediately introduced new ones which resemble the Uganda Police Uniform.

Clad in a Police like Khaki attire self-proclaimed ‘Ghetto president’held a press conference in his home in Makindye and handed the Military attires his team had to Police.

“We are following the president’s directive to hand over all the military attires that we had. We are going to continue bringing them from other ghettos all over the country because it is my responsibility as the ghetto president, “said Buchaman.

AIGP James Ruhweza confirmed that the Uganda Police received the attires from Buchaman.

“Today we have received related items like caps, shoes, uniforms, and belts. They have been handed over by Buchaman and we thank him for being exemplary. He has also promised to continue bringing more,” Said Ruhweza.

NRM is a home for sinners – MP Betty Nambooze

NRM is a home for sinners - MP Betty Nambooze