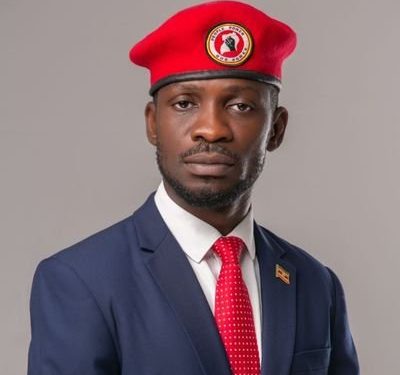 The National Unity Platform (NUP) has unveiled the official poster that their party presidential flag bearer Robert Kyagulanyi alias Bobi Wine will use for the 2020/2021 campaigns.

The poster has been unveiled by the NUP Secretary General David Lewis Rubongoya at the Party Headquarters in Kamwokya today afternoon.

Rubongoya said, “Our manifesto is in the final stages and will be launched soon. Today we aren’t launching the poster alone but the slogan for our campaign, which is “A new Uganda.”

Bobi is in Mbale and set to appear at Mbale High Court for the ruling of his Talk Show case. Nevertheless after his party unveiled his campaign portrait he posted saying; “When the struggle is over, we shall wear the victors’ crown in A NEW UGANDA.”

The NUP leader is set to be duly nominated to contest for President next week on November 3.

He becomes the second aspirant to unveil the official poster after NRM uncovered that of incumbent President Yoweri Museveni last week. The Poster has a slogan ‘Securing Your Future.’

According to the Electoral Commission the Presidential and General Elections are expected to take place in February 2021.