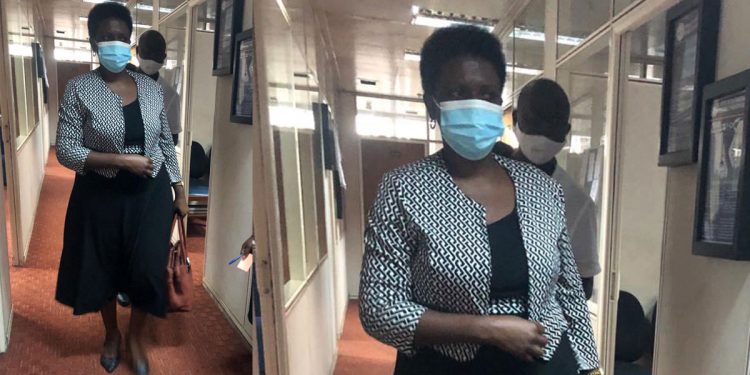 Equal Opportunity Commission Chairperson Sylvia Ntambi has on three occasions failed to honour court summons to answer corruption charges. Criminal summons have been extended to tomorrow, Wednesday October 29, and an arrest warrant will be issued in case she snubs court for the fourth time.

However, in a latest manoeuvre that has been seen as another attempt to evade justice, Ntambi was this afternoon seen at the Director Public Prosecution (DPP)’s office just hours before her court appearance tomorrow morning.

Her appearance at the DPP’s office has been treated with suspicion, as another way for her to skip court. The first time Ntambi was supposed to appear before court, she was seen at Parliament Speaker Rebecca Kadaga’s office, seeking her intervention. Kadaga was not of much help, but Ntambi skipped court.

In her last appearance, it was claimed by her lawyers that she had been taken ill and was admitted at Medik Hospital in Kawempe, which was not the case.

The judge however extended her summons to October 29 (tomorrow). Should she fail to show up, court will issue a warrant of arrest and any police officer can arrest her on sight and bring her before the Kololo-based Anti Corruption court.

“I will give her a benefit of doubt and give her the last chance and should she fail to come next time (tomorrow), a warrant of arrest will be issued. Criminal summons are extended for the very last time for October 29 at 9am,” Anti-Corruption Chief Magistrate Pamella Lamunu-Ocaya warned on October 7.

Ntambi is accused of negligence of duty that led to gross mismanagement of the commission’s funds.

She is indicted alongside, other nine members of the commission who have since been charged and are out on bail.

According to the amended charge sheet, the 10 commission officials are facing 25 corruption related charges.

Under count 12, Ms Ntambi alongside Ms Kamahoro and Mr Mpitsi, between January 6, 2019 and April 30, 2019, allegedly conspired to defraud government of over Shs9m.