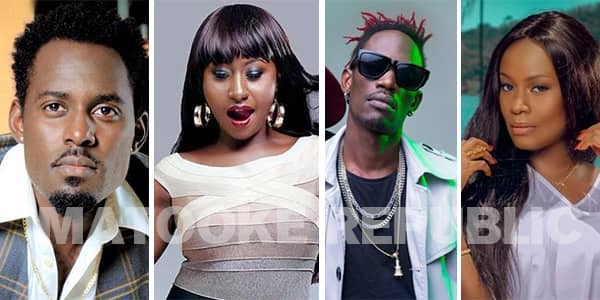 Today we look at a list of Ugandan celebrity siblings who have been making ripples in the music, television, radio, comedy, Politics, film and fashion industry over the years.

These siblings have earned big recognition within the public eye starting from famous artist brothers like Jose Chameleone, Weasel, late AK47 and Pallaso  who have dominated  the music industry while Mc Kats and Mc Isaac take the win in the Television department.

However the pairings of famous siblings doesn’t end there, here are the siblings who made it on our list of interests

The Uganda music industry would most definitely not be the same without the contributions of these four brothers Joseph Mayanja popularly known as Chameleone, Douglas Mayanja known by many as Weasel, the late Emmanuel Mayanja who was commonly known as AK47 and Pius Mayanja aka Pallaso are all into music. But they are not just your everyday musicians, Weasel and Pallaso are both respected singers while sibling Jose Chameleone is one of the African music legends and an aspiring politician.

Yoweri kagutta Museveni is the president of republic of Uganda and he has been in power for over 35 years while Gen. Caleb Akandwanaho known by many as Salim Saleh, He is President Museveni’s younger brother. Saleh is a retired bush war hero who still holds much influence in the military and security. He was once Minister of State for Micro-finance, senior presidential advisor on defence and now is the chairman of operation wealth creation.

It wouldn’t be a sibling list without the famous Robert Kyagulanyi alias as Bobi Wine and Eddy Yawe now would it? Bobi Wine is one of the Uganda best musicians and at the same time his critical role as an opposition politician cannot go unnoticed while Eddy Yawe is part of the Uganda’s successful ‘Afrigo Band.’

Juliana Kanyomozi is a Ugandan musician, actress and entertainer. She is one of the most respected East African Female musicians. In 2008 Juliana made her film debut in Henry Ssali’s Kiwani Movie while her sister Laura Kahunde is a Ugandan actress. She once played Angela on NTV’s Second Chance and also appeared in a Henry Ssali film Bullion with her sister Juliana Kanyomozi.

Katamba known by many as MC Kats is a popular Ugandan MC. He is one of the most sought out MC’s out there because of the life he adds to every public event. His brother Isaac is also a good MC who is currently working alongside his brother at one of the biggest televisions in Uganda, NBS television.

Talking about talent that runs in the family blood, one such easily recognizable family is that of the Kiryas who have been in the music for a long time. The two brothers Elvis Kirya popularly known as Vampino and Maurice Kirya hae been doing their things consistently for over ten years now

Andrew Mwenda is the professional journalist and Independent Magazine boss while his elder sister, Margaret Muhanga, also a former journalist with The New Vision is a Member of Parliament.

Rebecca Jjingo is a musician and famous local radio presenter while her brother Paul Jjingo is on the other hand an actor who have worked with one of the famous ‘The Ebonies group.’