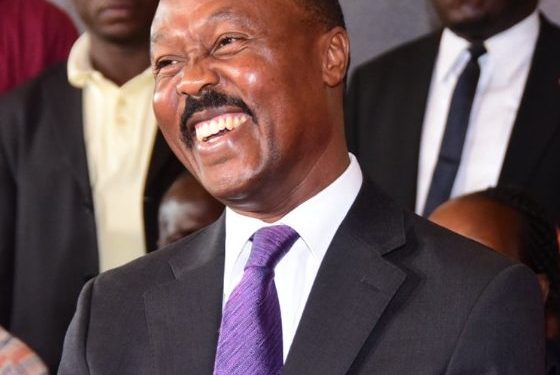 The Alliance for National Transformation (ANT) presidential candidates Gen Mugisha Muntu has been duly nominated by the Electoral Commission to run for presidency come 2021.

Muntu accompanied with his wife Julia Kakonge Muntu, MPs Paul Mwiru and Winnie Kiiza and other ANT officials arrived at Kyambogo University Cricket Oval at 2:47pm. He presented all the required documents to support his nomination and they were verified by the EC.

While addressing journalists shortly after nomination, Muntu urged the EC to conduct free and fair elections because the country’s future lies in the outcome of the elections.

Muntu said his nomination represents the beginning of victory for Uganda as his party will build and empower all structures.

The country’s highest office as of now has three contenders, Muntu, incumbent Yoweri Museveni and Gen. Henry Tumukunde. Youngest Presidential aspirant John Katumba has been rejected by EC due to failure to present evidence that he paid Shs20 million nomination fee.

Kalembe Nancy Linda will be the last candidate to be nominated today. She is on her way to the nomination venue.