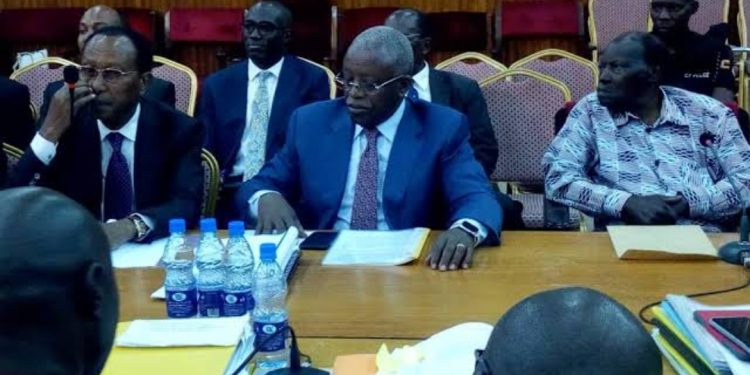 Justices of the Constitutional Court have ruled that the sale of the defunct National Bank of Commerce (NBC) to Crane Bank in September 2012 was legally handled by the Central Bank.

The controversial sale of the NBC bank in which former Prime Minister Amama Mbabazi was a major shareholder has been a longstanding dispute with the shareholders taking the government to court seeking reinstatement and compensation.

But in a 4:1 majority decision, the Constitutional court judges led by Geoffrey Kiryabwire dismissed a case in which a shareholder in the defunct National Bank of Commerce (NBC), Humphrey Nzeyi had challenged the legality of the closure, liquidation of the bank.

Nzeyi had petitioned the Constitutional Court challenging the legality of BOU’s decision to takeover NBC, liquidation, revocation of its banking license, the winding up, the closure and sale of the NBC to Crane Bank in 2012.

The Court ruled that the acts of Bank of Uganda (BOU) to intervene and revoke the license of NBC and then wind up are not unconstitutional.

“It is still possible to argue that notwithstanding the law, the manner in which the act of removing management and winding up the NBC were done could have been unconstitutional. The onus to prove this, lies with the petitioner; but I find he has not been able to do so. It is not enough in my view to say that the whole process was rushed in one day,” Justice Kiryabwire held.

Justice Kiryabwire asked Parliament to improve the law embodied in the Financial Institutions Act (FIA) with regard to the management of failing financial institutions.

In his dissenting ruling, Justice Kenneth Kakuru reasoned that the complainant and the shareholders of the defunct NBC were entitled to redress in form of damages but was unable to ascertain them from the record.

Mr Nzeyi had petitioned the Court against BOU and Attorney General following a decision that put NBC under the management and eventual liquidation and sale by the Central Bank.

According to Court record, on September 27, 2012, BOU wrote to the Managing Director of NBC communicating the takeover of its management and that it is on the same day a public notice was issued by BOU winding up its affairs.

Court record shows that on the same day, BOU concluded a purchase and assumption agreement with Crane Bank Limited which then took over all deposits and assets of the NBC effective October 2012.

Justice Barishaki on the other hand reasoned that on the evidence presented by BOU, he concluded that there was reason for the closure of NBC in the public interest of achieving stability of the banking sector by maintaining good prudential control authorised by the constitution.

“Whether or not the officials of BOU acted with criminal intent, or misfeasance in their handling of the closure of NBC, is a matter to be placed before a court with competent jurisdiction to hear and subject the evidence to scrutiny and arrive at an appropriate decision,” he said.