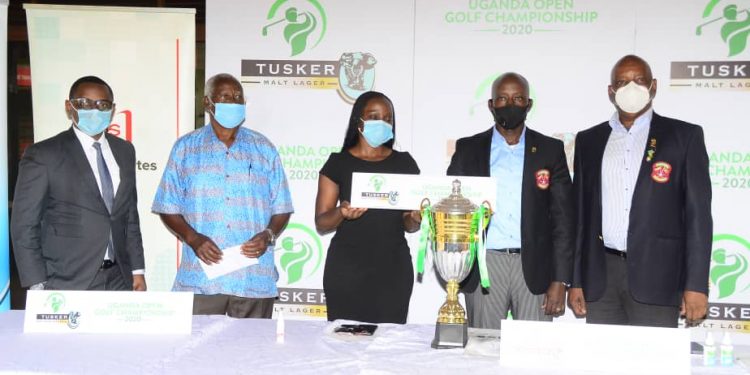 The most anticipated event on Uganda’s golfing calendar, the Uganda Open Golf Championship is back.

The tourney that was initially slated for August as per the norm was forced into November due to the government lockdown that put a stop to sporting activities among other measures to curb the spread of the Covid-19 pandemic in March. Government cleared sporting events to resume in September.

The Uganda Golf Union in partnership with title Tusker Malt Lager announced this year’s Open during a press conference held at the Uganda Golf Club in Kitante earlier today.

The Uganda Open returns to the par-72 Uganda Golf Club in Kitante after a two-year hiatus that saw the event held at the Entebbe Club and the Lake Victoria Serena Golf Resort and Spa respectively.

The eleven-day event will officially tee off on November 25, with the Ladies’ Open slated for November 26 to November 28. This will be followed by the men’s amateur event, one of the oldest playoff events that will be marking its 79th staging in the championship with two major categories that are; the Amateur Gross event and the Amateur Subsidiary event, which will run between December 1 to December 4 and December 5 to December 6 respectively. The tournament will be crowned with the professional event running between December 3 and December 6.

Speaking to the media during the press brief, UBL Representative Annette Nakiyaga emphasised the brand’s commitment to golf, promising a stimulating run of events.

“Tusker Malt Lager prides itself in its long-standing relationship with golf in Uganda. Our commitment is 100% undisputed,one that remains constant and continues to manifest with our golf engagements countrywide. At Tusker Malt, we set the benchmark for quality and achievement and we are once again honoured to be a part of a tournament that represents the same,” said Nakiyaga.

She revealed that UBL had injected 100 Million Shillings in the tournament.

The Uganda Golf Union UGU president Moses Matsiko said the major focus this year is adherence to SOPs to avert the spread of COVID-19.  “This is the first major golfing event since COVID-19 broke out we are hoping that our event will be a benchmark for other sporting disciplines. 360 players are registered for the tournament so far”.

Tournament Director John Katto emphasised that this year’s format of play will be a little different, with no cuts and a kitty totalling up to Shs100m that is set to be split between 30 professional golfers who will be awarded according to merit. The winner will take 22.5 % of the pro-kitty and the remainder of the players will share 77.5 % of the prize money in ascending order.

He said the tournament has attracted several international players coming in from different countries all over the world including 78 professionals, 1 from South Africa, 3 from Nigeria, 1 from Senegal, 1 from Zimbabwe 10, Cameroon 5, France 2, Cote D`Ivoire, Ghana 1, Malawi 1 and Zambia 3.

The tournament will end with a prize-giving cocktail on Sunday, December 6 at the Uganda Golf Club in Kitante.

Ofwono OPondo: No law says a Presidential candidate should be treated differently when they break the law

Ofwono OPondo: No law says a Presidential candidate should be treated differently when they break the law