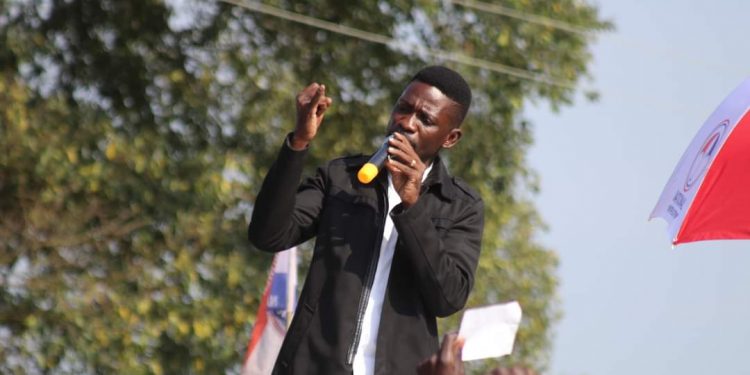 The National Unity Platform presidential candidate Hon. Robert Kyagulanyi alias Bobi Wine resumed his campaigns today. Despite a few hiccups, the campaigns went on as scheduled. While addressing the people of Fort Portal Bobi Wine who was arrested and released last week on Friday said that his only crime is the love and support he receives from the people.

“When people welcomed us in big numbers, Museveni couldn’t take it. He ordered the police to arrest and beat me,” said Bobi.

Bobi said that his opponents want the people to lose hope and are instilling fear in them but asked them not to be scared. He also told them not to deter from the struggle of liberating themselves because he is the leader who will be their servant and not their boss.

“When Museveni is coming to Fort Portal they are going to bring money so that you wave at him. He will pay musicians to come and give you T-shirts while Kneeling,” said Bobi.

Bobi said there’s no reason why there are no tarmac roads leading to the teas estates and also questioned why Fort Portal is not the most popular place in the world.

He also pledged to improve the education system in the country.

“I am a product of simplicity and when I become President. I will subdivide education into four As( Academics, Arts, Athletics and Agriculture). We should be exporting doctors not maids. I will respect sports talent the way I respect academics,” said Bobi.