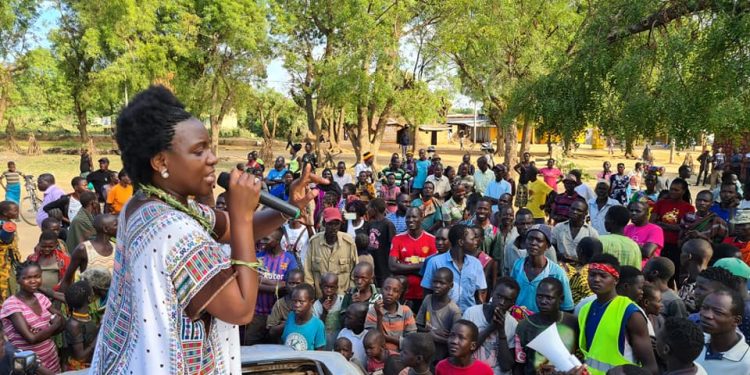 Female presidential candidate Nancy Kalembe has asked the Karamojongs why they continue to support a government that has failed them.

“Karamoja region has been one the strongest supporters of the current government but what have they benefited, they have been the poorest compared to other regions,” said Kalembe

Kalembe said for all the years the Northern and Eastern region where she comes from have supported the NRM they have not benefited anything but rather feels like they are not Ugandans.

“I visited Kiruhura district where our current leader comes from, there’s no single house in that district that looks like the houses where we come from,” said Kalembe

She added that the leaders from the Eastern and Northern region have been blinded and have fallen for the lies of this government.

“Leaders of Eastern and Northern region of this nation I call upon you, the money that this government gives you has caused you to sale out your people. This must stop because for the greater good we need a government that actually cares for this land, “said Kalembe.

Kalembe said that Karamoja is rich in minerals and yet it is the poorest region, she told the people of Karamoja to vote for her and that will change.

“Karamojongs are very strong and intelligent. The poverty government speaks of, is poverty they have created.When I am President that will change,”said Kalembe.

Kalembe added that Karamoja is a wealthy region perhaps one of the wealthiest region in Uganda and in her government the region will have clean water, better health facilities and good schools.

She also said that she will set up community businesses for the people so that they won’t have to go to the central region to seek for employment and promised that everyone will have access to electricity.