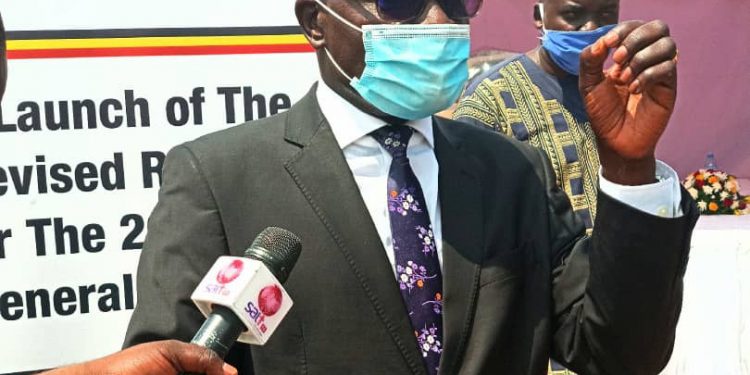 With a few weeks to the voting day, the Electoral Commission Chairperson Justice Simon Byabakama has said that the biggest problem in our political class is indiscipline.

“Some of them will out rightly tell you forget about Byabakama we shall do our own. We can disregard what he is saying. That’s the most unfortunate thing,”said Byabakama

Justice Byabakama also said that he has heard one of the candidates telling his voters to remain at the polling station after voting yet every candidate is entitled two agents at the station to verify the votes.

”Once you have cast your votes don’t go home, stay around. Do you see the stage being set for something. Those people can be a cause of violence. If they notice their candidate is losing,” said Byabakama

He also added that it’s very dangerous to tell the people to remain after voting because once the content is destroyed the electoral commission will be forced to declare the results of that area null and void.

Justice Byabakama also said that they subjected all the candidates to same processes and incase anyone feels the commission is not transparent , they should air out their queries.

Speaking about the incident of Kyagulanyi being arrested shortly after nominations, Byabakama said that the frackas occurred far away from them.

We nominated over eight people that day. We weren’t happy with what happened, it put a stain on what could have been a colourful event. The security said that the candidate wanted to take a certain route different from the one he was supposed to use,” said Byabakama