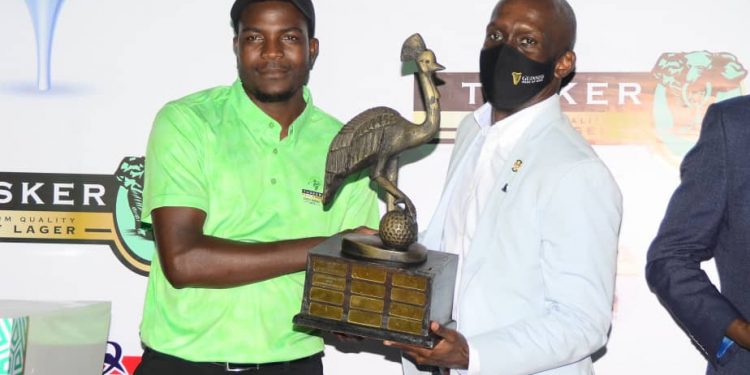 Zimbabwean golfer Robson Chinhoi of the Royal Harare Golf Club is winner of the Tusker Malt Uganda Open Golf Championship – Professionals Open after emerging ‘top of the rest’ during the final round of the event played yesterday Sunday December 6th, at Uganda Golf Club in Kitante.

Chinhoi managed 15 under par After four rounds,a total gross score of 273 at the event that also doubled as the fourth leg of the Safari Tour, a Qualifier for the 2021 Magical Kenya Open.

“The course has been tough due to the rains. The final day was even more tough as rain interrupted play but thank God we were able to finish our round even though late in the evening,” Chinhoi said during a media session at the 18th hole.

“I started preparing for this event last month after the Vet Lab leg of the Safari Tour and I’m happy that my efforts have paid off,” he added
The Zimbabwean won himself Uganda Sh. 22.5M from Tusker Malt’s 100M pro kitty while the remainder of the 35 players who made the cut shared 77.5 % of the prize money according to performance.

The fact that the Uganda open 2020 has happened in the year that it is supposed to happen is something to be thankful and I am more than delighted that we as UBL get to take part.As you are all know Tusker Malt has had a very long standing relationship with golf it is not about 2020 for us it’s about the long run. we are 100% committed to golf hence we are here to stay” said Emmy Hashakimana, Marketing director Uganda Breweries Limited.

On that note I would like to concrajulate the Uganda golf union for the great leadership and the resolve to ensure that this happens, he added

The Uganda Open is the fourth leg of the new Safari Tour season and the first event played outside Kenya and the weekend triumph means that Chinhoi now has two titles in the circuit after fighting back on last day to emerge the victor at the Royal Nairobi Golf Club leg in October.