Museveni on leaving power: Let me stay around until I see someone useful 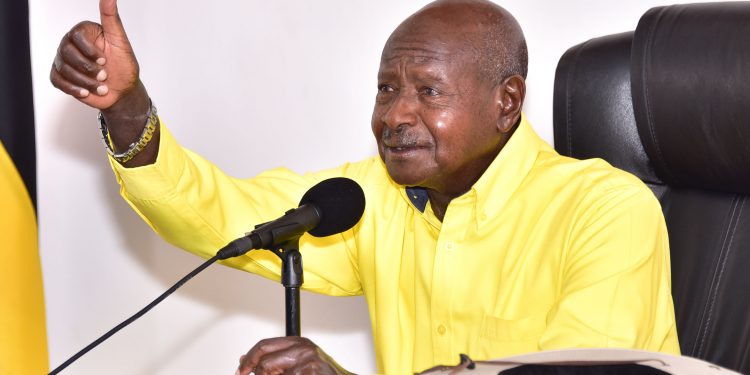 The NRM presidential flag bearer, President Yoweri Kaguta Museveni has disclosed that his long stay in power is not because he’s hungry for power but rather he has failed to find a suitable replacement for the country’s top office.

While addressing his campaign meeting in Rukungiri Municipality, Museveni said most of his opponents have failed to show their usefulness when he’s still around and have resorted to shouting at him how he has to leave.

He singled out his former allies former Security Minister Lt. Gen. Henry Tumukunde and former army commander, Maj.Gen.Mugisha Muntu as people who failed on their duties but are now shouting at him.

“If you failed to do what I told you, don’t bring your chaos by asking me to go. It is the voters to decide,” he said.

Museveni warned politicians on focusing their politics on tribes and religion.  He said NRM will not tolerate such sentiments.

The NRM presidential candidate will today be in Kasese District and later Kabarole, as he begins his campaigns in Rwenzori and Tooro sub-regions.

You can’t take away COVID-19 by shooting at crowds or putting on military wear, please invest in medical sector –Dr. Obuku Ekwaro

Azawi fed up with fans trolling her teeth,undergoes dental surgery

Azawi fed up with fans trolling her teeth,undergoes dental surgery