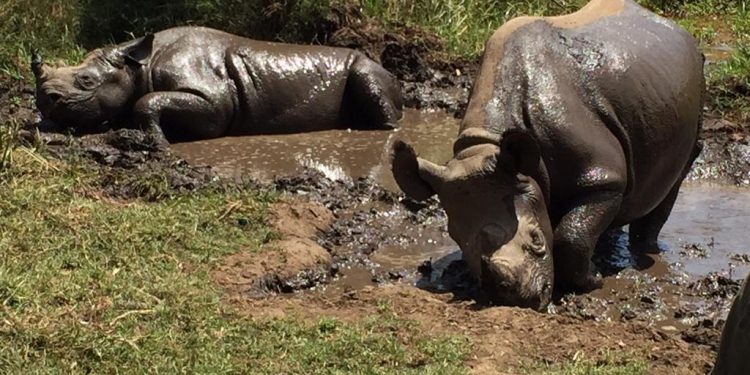 Ruparelia Foundation in conjunction with Rhino Fund Uganda has named the rhino calf that was born on Saturday at the Rhino Santuary in Nakasongola Rae Ruparelia.

Rhino Fund Uganda runs the Rhino Sanctuary that was set up in 1996 to breed and return the endangered rhino spicies to the wild in Uganda. Rae Ruparelia brings the number of rhinos at the sanctuary to 34.

At the naming ceremony, the Ruparelia Foundation was represented by trustee and Group Managing Director Rajiv Ruparelia and his wife Naiya. Rajiv said that there is a need for the next generation to learn and value the national parks and other protected national sites for the benefit of the country and the people of Uganda.

Rajiv added that starting next year, Ruparelia Foundation will embark on networking Uganda’s tourism assets to the international community with the view of making the country a hotspot for tourism destination globally.

The businessman also revealed that the Ruparelia Foundation paid $5,000 (about 18m) to Ziwa Rhino sanctuary to acquire naming rights for the baby rhino that was named Rae Ruparelia.

Angie Genade the Executive Director Rhino Fund Uganda said the fund is grateful to the Ruparelia Foundation for partnering and naming the baby rhino.

Genade added that she wants the partnership to grow and Ruparelia Foundation to become the ambassadors of the rhino programme in the country.