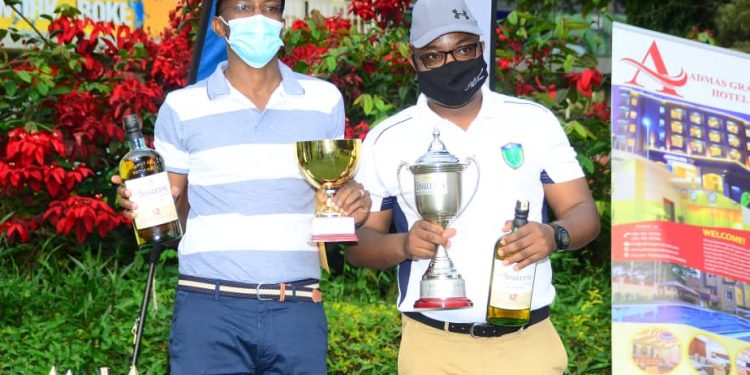 The pair that beat the club house darlings Oscar Semawere and Marvin Kagoro; 2 up in the semi-final beat rivals Anthony Ndegwa and Dianah Nambalirwa 5/3 to seal their spot at the top winning themselves a fully paid trip to the Dubai Omega desert classic that is slated for January 2020.

For the second runner up handicap 17 player Nambalirwa the loss to Nahabwe and Adoch is not as bad as she becomes the third woman to reach the finals of the match play .

This came a joyful succession following the only two other women; Peace Kabsweka and Sheila Kensime who have had a pleasure to not only be in the finals but also win the championship.

“For me, this is something that I didn’t expect, the green was tough not only because of the weather and the pandemic but the opponents that turned up this year who were also not easy to beat they bought there all on the green” said Nambalirwa.

Talking to Journalists at the event UBL’s Paul Rwandekeyi, said commended the players for sticking it out and finishing the season with everything going on.

“ I can’t thank the players enough for sticking it out and making sure that we finish this season successfully, it has been at all” said Paul

The event that usually ends on a high with the ever enthralling 19th hole experience was attended by a few because due to the pandemic that just like any other industry affected the sports world which changed the whole set up of the tourney.