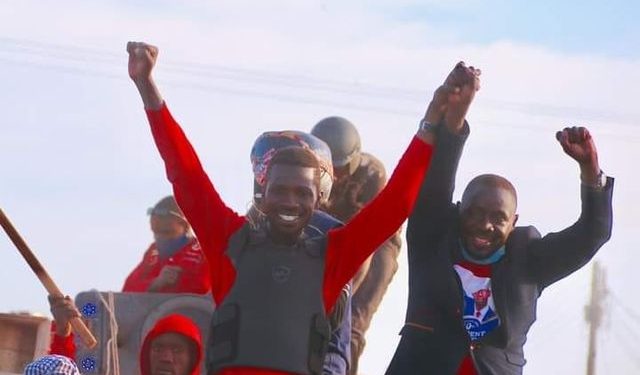 A joint security team has today besieged National Unity Platform (NUP) presidential candidate Robert Kyagulanyi and his campaigning team as they made way to Kalangala district. Bobi Wine and his team were arrested and driven to a Police station in Kalangala Island.

His arrest has once again immediately caused tension around the country especially in urban areas of Kampala and Wakiso.

In a statement, Police has refuted reports of arresting the presidential hopeful while on his campaign trail in Kalangala District.

“We would like to clarify that the candidate was restrained for continuously holding massive rallies amidst the increased threats of coronavirus, in total disregard of the Electoral commission and Ministry of Health guidelines. He’s being transferred to his home in Magere, Kampala,” says Police in a statement.

It adds, “Part of his advance team, captured on CCTV cameras and several video footages, while deflating tyres of police motor vehicles , inciting violence, obstructing police officers on duty, violating the health and safety protocols and various traffic offences, have been arrested for further statement recording.”