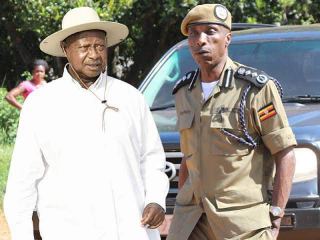 As he resumed his physical campaign meetings yesterday in Kisoro, the ancestral home of former Inspector of General of Police (IGP) Gen. Kale Kayihura, the ruling NRM presidential candidate
President Yoweri Kaguta Museveni promised to engage the high Army Command and request them to pardon the former IGP.

“Kale Kayihura (former IGP), just like the (Kisoro LC5) chairman said; there are those who committed heavy sins and we forgave them. So then why don’t we forgive him! Because you’ve asked and said he’s our person (NRM) I’ll speak to the military prosecution and tell them your request and also add in my request to have him forgiven,” said Museveni while addressing NRM leaders in Kisoro district where he was canvassing for votes ahead of January 14, 2021 polls.

Gen Kayihura was sacked as IGP in April 2018 in the wake of a spate of killings that rocked the country, especially the murder of women in Wakiso District, kidnaps for ransom and assassination of Muslim clerics and some government officials.

He was later arrested and charged in court martial for misuse of government stores and legal repatriation of refuges from Rwanda among other crimes.