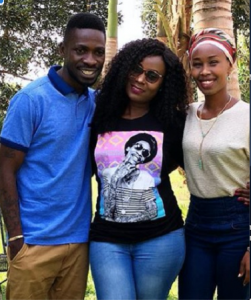 As the nation waits on Robert Kyagulanyi alias Bobi Wine’s next move after elections, the NUP leader continues to receive applauds from all corners of the world for his decision to contest for the country’s top office.

Latest to join queue to take off hat for Bobi Wine is Uganda’s finest songbird Juliana Kanyomozi. Known for always being silent and not taking a stand in politics, Juliana has decided to leave the ‘Kamooli’ and shower Bobi Wine with praises.

Juliana took to her social media to heap praises at Bobi Wine.

“You have come a long way Bobi Wine, and yet you are still standing. You have inspired an entire generation.

To say I’m proud of you is an understatement; I take my hat off for you! Big thank you to Barbie for always being your rock. Continue to walk in your calling. Be safe,” Juliana said.

She however has received a good reception from her fans who have asked to resume being silent since alot has been happening to Bobi Wine as she kept quiet.

Juliana and Bobi Wine are no strangers to each other as the duo composed magical collaboration songs that topped Ugandan airwaves in the early 2000’s.

Earlier on Juliana came out and hit at government for shutting down internet saying that it was an absolutely wrong move as many Ugandans use internet to earn a living.