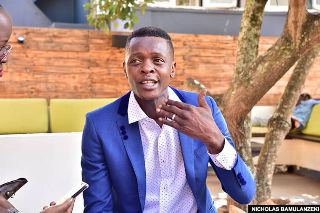 Today is the day Ugandans are going to the polls to elect the Mayor of Kampala and the Leone Island boss and singer Joseph Mayanja popularly known as Jose Chameleone says he is the solution to Kampala problems.

While speaking in an interview the ‘Basiima Ogenze’ singer, who was denied Kampala’s flag bearer card by Bobi Wine’s National Unity Platform (NUP), asked Ugandans not to vote people who are going to add nothing to the development of Kampala, and emphasized why they should vote for him if they want Kampala to become a better city.

“I am not here for popularity. I have seen it all and gotten fed up. I just want to make Kampala great. I have got a chance to travel to big world cities and I also want to make Kampala look better than those cities,” Chameleone said.
Showing confidence, Chameleone, who is running as an independent, said in an interview that he will trounce the incumbent Lord Mayor – Elias Lukwago of the Forum for Democratic Change (FDC), fellow entertainer Ragga Dee (National Resistance Movement), MP Nabilah Naggayi Sempala (National Unity Platform) and Charles James Ssenkubuge of the Democratic Party among others.

“I have a big chance of winning this. At first, they disrespected artists who joined politics but our music has done a good job. Get my songs and remove the beats and read the message you will realize we write with a purpose. We see different things happening to people. Unless they rig these elections, but people are ready and willing to vote for Mayanja because they have studied me and found out that I’m the right person to solve Kampala problems. I can’t sing all these songs and still have a coconut head,” said Chameleone.