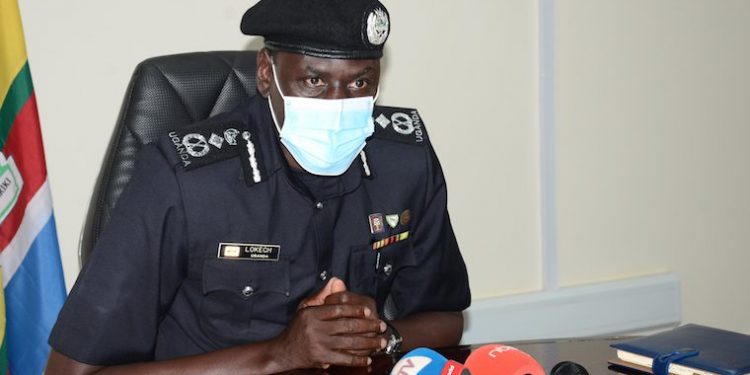 While addressing a joint security briefing at Police headquarters in Naguru, Deputy Inspector General of Police, Maj. Gen. Paul Lokech said that their intelligence teams have already got credible information that individuals and political groups are promoting panic and fear, using malicious video footage and audios, to purposely intimidate and prevent the public from going about their normal businesses or reporting for work between February 3rd to February 7 2021.

Lokech says the circulating audios and videos are ordering people to stay in their homes, stocking food and threatening all persons who will defy their alleged stay-at-home orders.

The Deputy IGP reveals that the authors are allegedly affiliated to the National Unity Platform (NUP).

“This development by NUP of marshalling fear to rally support for street violence and civil uprising, for their selfish political advantage is not new to us.  It was used by the FDC in the aftermath of the 2011 and 2016 general elections,” says Lokech.

He adds, “Interestingly, it is the same NUP that has petitioned the Supreme Court, that has resorted to fear-mongering about the possibility of targeted attacks on security and other Ugandans who are against such plans of impunity and lawlessness.  The public should be aware of how previous attempts by NUP to hold protests, were accompanied by riots, massive acts of looting, threats to many people’s lives, robbery etc.”

He assures Ugandans that they should not be intimidated from going about their lawful businesses, because their security and safety is guaranteed.

“We have shown Ugandans over and over again that we would have a very peaceful election and indeed it was very peaceful.  We are now doing everything within our means to keep the general public safe and secure from all forms of violence including politics that is divisive and manipulative during this aftermath of the Elections,” he says.