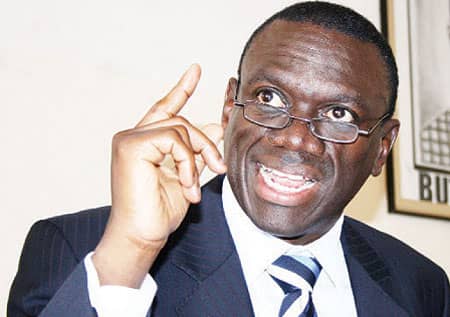 Opposition strong man Dr Kizza Besigye has said that the problems of Uganda cannot be solved by him or even Robert Kyagulanyi alias Bobi Wine.
Besigye says that Ugandans who feel oppressed must consciously coordinate and work together and get rid of President Yoweri Museveni’s regime.

“How do we get out of armed rule in Uganda? We simply have to struggle and it is a tough struggle,” says Besigye.
Besigye says that in ‘Uganda’ they’re struggling for, citizens should get their sovereignty, they should have a right to choose who should lead them and a right to choose what is right or wrong.

For every election, the four-time presidential candidate claims that the regime announces what they want and say, ‘now go to our court.’
He stays its high time Ugandans drew a bold line and decide whether to side with the oppressor or oppressed.

“If people unite and decide what to do, it wouldn’t take two weeks with the regime still in power,” he says.

Besigye’s comments come a few days after Bobi Wine who finished second in the just concluded presidential election with 35% of the votes said that Museveni will not be President in less than a year.