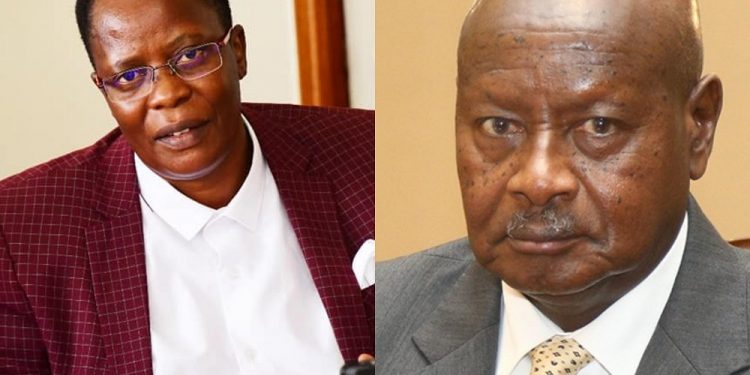 “I read in the newspapers about the European Union (EU) Parliament sanctioning some Ugandans from traveling. For anybody to think that Africans are dying to go to Europe is something that shows lack of seriousness,” Museveni said.

The Mukono Municipality legislator Betty Nambooze has responded to Museveni saying majority Ugandans cannot survive without going to the west including Museveni and his family.

In a long FaceBook post, Nambooze said that Ugandans can’t live without those journeys and it’s indeed so worrying that some colleagues have been banned from travelling there.

“You (Museveni) can’t survive without travelling to the Bazungu’s countries. I recall some years back you picked a pen and paper and defended your family for having used the Presidential jet to take your daughter to Germany to deliver a baby.

In that letter you (Museveni) explained that it would be damn stupid for you and members of the first family to surrender your veins to receive an injection from a Ugandan medic.

You explained to us that those are the little things we Ugandans should let to pass in view of the sacrifice your family has made for the good of Uganda,” Nambooze said in a post.

She added, “I must declare that when the SFC you sent to Parliament  to secure your future on the ballot paper broke my backbone Uganda Government sponsored me for a medical trip to India. And other many comrades have benefited from the same. As a country we spend Shs365 billions a year to take various people for specialized treatment in those countries annually.”

Nambooze said that Uganda needs the West to at least treat us as individuals and as families.

“We look funny when we wear a brave face and denounce EU when we know that the same people are our funders,” she said.