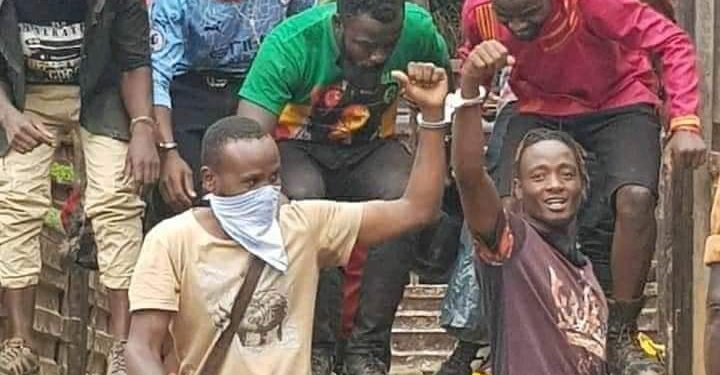 The Court Martial in Makindye today sent back the 37 NUP supporters to jail pending hearing of their case.The suspects were arrested a month ago in Kalangala when Robert Kyagulanyi was traversing for votes in the area.
In his ruling, the army court chairman Lt Gen Andrew Gutti said that, the acts of violence by the suspects are likely to continue when they’re released on bail.”

Those whose bail application ruling had been deferred today, and has been rejected, also include NUP leader Robert Kyagulanyi’s music producer Daniel Oyerwot popularly known as Dan Magic.

Last week, Gutti sent them back on remand after the prosecution led by Maj Samuel Masereje, Maj Emmy Ekyaruhanga and Captain Ambroz Guma rejected their bail pleas, saying they were likely to instigate riots if given temporary freedom.

In support of their position, the prosecutors presented an affidavit sworn in by D/AIP Peter Wetaaka attached to Criminal Investigations Department (CID) Headquarters, saying that the 36 were violent and inciting violence during the time of their arrest.

“From the time they were arrested, the accused were inciting violent protests and were of violent conduct towards police officers which they are likely to continue if granted bail,” Wetaaka’s affidavit stated.

Wetaaka added that none of the suspects were tortured throughout the whole investigation process as their lawyers had earlier alleged.
According to Prosecution, 49 suspects and others still at large on January 3, at Makerere Kavule Kigundu zone, in Kampala district, were found in possession of four rounds of ammunition, which is a monopoly of the defence forces.

Prosecution added that, the accused are subject to military law by virtue of Section 119 of the Uganda People’s Defence Forces Act, 2005

PHOTOS: How your celebrities spent their Valentines Day