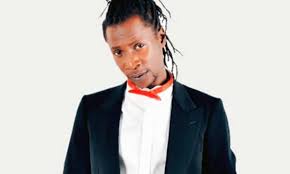 As other men are busy splashing money on Ugandan female musicians, the self-proclaimed Luo Ambassador to Kampala singer Coco Finger has come out and revealed that no female musician in Uganda can turn him on.

The ‘My Miss’ hit-maker who is also famed for his electrifying dance performances made his statement while appearing on one of the local TV stations where he spoke about his new song ‘Zoom’, and his plans for the future.

During the interview, the ‘zoom’ singer was questioned about a lot of relationships that are happening in the entertainment industry, many have been dating fellow musicians but they never had him in any relationship scandal. He replied saying relationship matters are not supposed to be publicized.

The singer was once again asked to tell which Ugandan female musician he could date in case he was given a chance and he replied that he cannot date any female musician in Uganda including beautiful Lydia Jazmine and Chozen Becky.

“No, no I can’t love any of the musicians, I can be their friend but I am attracted to none. I know they have other men who can love them but I am not interested in them,” Coco Finger said.

Coco also revealed that he has a wife at home and they have one kid together in all the years he has spent in the music industry.

Coco Finger also stressed that he is still energetic and more than ready to take on his career in music. He explained that he lives up to his dreams and is ready to meet any challenges that he is likely to face along the way.