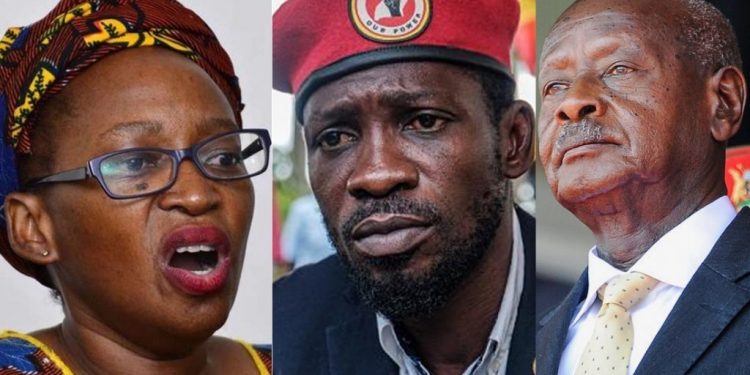 Recently activist Stella Nyanzi has been at the peak of writing poems attacking Bobi Wine and his National Unity Platform (NUP) party.

In the process, she has faced the wrath of Bobi Wine’s supporters with many labelling her a political failure that needs therapy to recover from her Kampala Woman MP Election loss.

Nyanzi has now made a U-turn applauding Bobi Wine’s new move of calling upon Ugandans to peacefully demonstrate against an alleged rigged Presidential election.

Bobi Wine yesterday at his party headquarters in Kamwokya declared himself winner of the presidential election with 54.19% of the votes. He tabled his evidence of DR forms claiming that the January 14th election was massively rigged.

Meanwhile Museveni was declared the winner of the elections by the Electoral Commission with 58% of the vote while Bobi Wine had 35%.

Nyanzi says that Bobi Wine’s call for demonstration has made her regain the trust she had in him.

“I celebrate Bobi Wine’s call for peaceful protests against the excesses of dictator Museveni in Uganda. I do. Today’s call underscores why I believe in him. This is what I admired in him as a leader in the fight for freedom in our country; the ability to galvanise masses for civil disobedience and civil action,” says Nyanzi.

She believes that the opposition in Uganda needs to unite now more than ever, if they are to make inroads into the fight for freedom.

“FDC has got the long-time experience of organising and executing sustained defiance actions. NUP has the popularity and youthful masses particularly in the capital city and other urbanities.

Of course, all the other political parties that believe in the call for peaceful protests must be welcome to this new phase of the struggle,” she says.