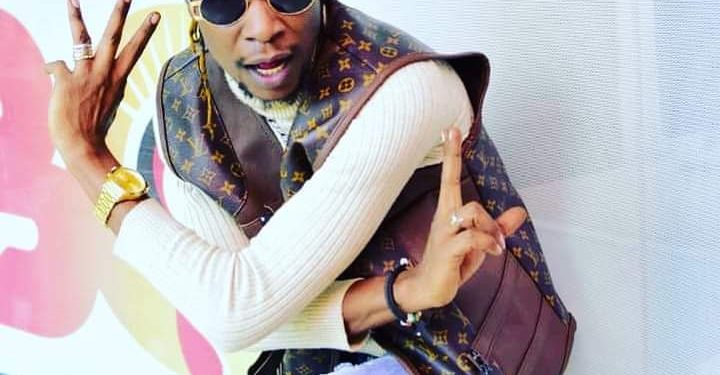 It was during the church service at the Worship House Ministries International Church with Pastor Wilson Bugembe that the the singer was asked to share a moment he will never forget in his life.

Coco Finger then proceeded to narrate a story about the making of his first hit song ‘Emikono Wagulu,’ a time when he was still an upcoming singer and struggling to make a hit song. He shared about how his friends used to advise him to go to witchdoctors if he wanted a hit song something which he refused and rather started to read the bible.

The singer said that one day he was reading a Bible verse in the book of Isaiah 41:40  which reads, ‘So do not fear, for I am with you, do not be dismayed, for I am your God. I will strengthen you and help you; I will uphold you with my righteous right hand.’

He was overwhelmed by the depth in the reading and instead decided to pluck the full page and smoke it like a cigarette so that the message sticks.

“I wanted to take them in so I plucked out the full page and smoked it like a cigarette. It may sound crazy but after smoking that page I went to the studio and that is when I recorded my first hit ‘Emikono Wagulu,” Coco Finger narrated.

The ‘Zoom’ singer further told pastor Bugembe that he believes that smoking the Bible page helped him come up with his hit song ‘Emikono Wagulu’.

Coco further advised all musicians who want to make it like him to work hard as they pray.

MP Odonga Otto arrested over illegal possession of a gun

AFCON 2021 Qualifiers: We must qualify for AFCON finals—says Onyango after Cranes’ goalless draw against Burkina Faso

AFCON 2021 Qualifiers: We must qualify for AFCON finals—says Onyango after Cranes' goalless draw against Burkina Faso