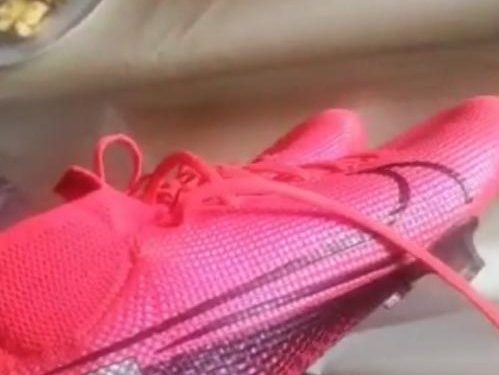 The duo have been teammates on the national team since 2013 when Aucho made his debut though Hassan Wasswa had already got his breakthrough on the team way back in 2006.

We know many of you will not be shocked by Aucho’s choice of getting red boots as a gift to Wasswa but who are we to be political with his classy gesture especially when the receiver has appreciated the gift as he posted it on his status with a caption, “Asante Aucho Khalid kati zabike,” which loosely translates as Thank you Aucho Khalid, let roll.”

The pair has been a dependable pillar is Cranes’ two consecutive AFCON campaigns however this on-going campaign, Wasswa opted out to create space for upcoming players whom he encourages to work hard if given opportunities. He made 76 appearance for the Uganda Cranes playing at two AFCON finals 2017 and 2019.

For Aucho, he is still on the team though he was suspended by FUFA for the Burkina Faso and Malawi fixtures for misconduct, an incident which he apologised for.