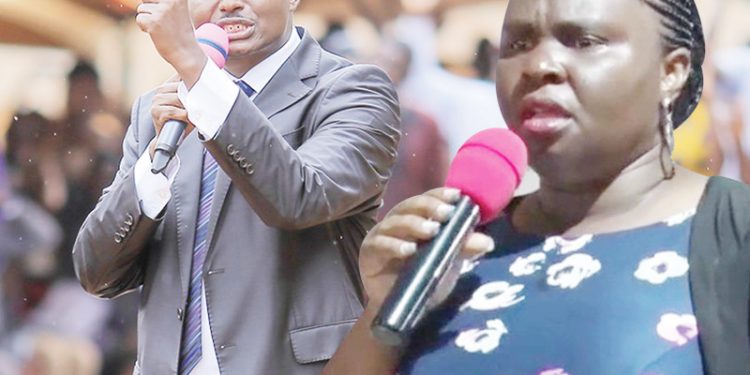 The Bugingo family dominated the headlines the whole of 2019 after Pastor Aloysius Bugingo of the Makerere-based House of Prayer Ministries International (HPMI) decided to run to Court to dissolve his 29-year-old marriage with his wife Teddy Naluswa.

The estranged couple constantly attacked each other publically before court ordered them to keep their affair out of the public. In his lunch hour preaching yesterday at Canaan land Kikoni, Bugingo re-launched several attacks to Teddy and a group of fellow pastors that she’s ‘in bed with.’

According to Bugingo, renowned pastor couple Robert Kayanja and Jessica Kayanja of Miracle Centre Cathedral are working with Teddy to fail him.

“I was with Teddy for over 20 years but we never talked to the Kayanja family. Now I am surprised that the same family that has hated on me are intervening in our affairs that are in court,” said Bugingo.

He accused Kayanja of having bias in the case as he has never called or texted him (Bugingo) to explain his side of the story.

“I can never get back with Teddy even when God physically comes on earth to intervene. Maybe we can get back together after the Kayanja family dies,” he said.

In 2019, Pastor Bugingo ran to court to dissolve him 29-year-old marriage and in his petition the pastor stated how he no longer had “love and attraction” he had for Naluswa due to her cruelsome nature and incompatible impulsive conduct.

Naluswa replied saying that Bugingo had no genuine reason leading to the halting of their marriage. Teddy wants court to dismiss the case so that they get back together but Bugingo is willing to offer Teddy any of the property they worked together to enable the divorce.

The pastor is also already in a stable relationship with his fiancée Suzan Nantaba Makula, a staff at his Salt Media even before court can officially allow the dissolution of their marriage with Naluswa.

“Even when I am fighting, I fight with love,” Museveni advises Ugandans to be God fearing as he eulogizes the Late Archbishop Lwanga

“Even when I am fighting, I fight with love,” Museveni advises Ugandans to be God fearing as he eulogizes the Late Archbishop Lwanga