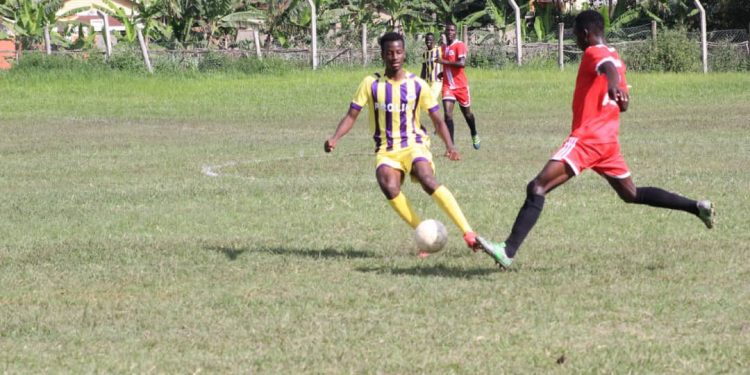 Has Bebe Cool’s son Alpha Thierry proved that he’s not an ordinary player with his wonder-goal against MYDA FC yesterday that gave Proline FC 4-1 advantage in their first leg of the Stanbic Uganda Cup? Or it’s too early for the praise?

Alpha might have a humble, down to earth and polite character but his father’s (Bebe Cool) image has made him face so much criticism that critics think he’s making steps in his soccer career due to Bebe Cool’s influence.
The 17-year-old was part of the historic Uganda Hippos squad that reached the AFCON U20 finals last month. Many claimed that Alpha was named in the squad because of his father but his talent couldn’t let him even play a single minute at the tournament.

However, with his wonder goal his future in football seems to have taken a new twist as many are showering him with all kinds of praises. Alpha completed Proline’s counter attacking move with sole brilliance as he skilfully dribbled past three defenders before hitting the ball hard into the back of the net.

He went straight to his father to celebrate his first senior team goal on his second appearance.
His brave effort has overwhelmingly earned him praises from critics. They are now tipping him to be Uganda’s’ next biggest football star.
Have the critics unjustifiably been judging Alpha?

Alpha’s inclusion in the Uganda’s U20 side that played in Tanzania for the Cecafa Championship and AFCON U20 in Mauritania generated a lot of debate, but does anyone know how far Alpha has come? Alpha was the second youngest on squad with majority being 19, so he needs more time and maybe the tournaments were used as a learning process for him.

Alpha started his journey at 3 years at Proline Soccer Academy and has been impressive hence enjoying a steady progress in his football career. He was captain of their under 17 and won the 2016 Proline Soccer Academy Player of the Year Award hence the technical team enormously promoted him to the senior team this season.

He made his senior debut at Proline Football Club last week in Proline’s 3-1 win over Terrazo and Tiles FC in the FUFA Big League. He came as a substitute. And it was yesterday on second appearance that he scored a wonder goal that has left everyone talking.
Seems like we need to give the boy time to grow his promising career. Alpha started his journey at 3 years at Proline Soccer Academy and has been impressive hence enjoying a steady progress in his football career.