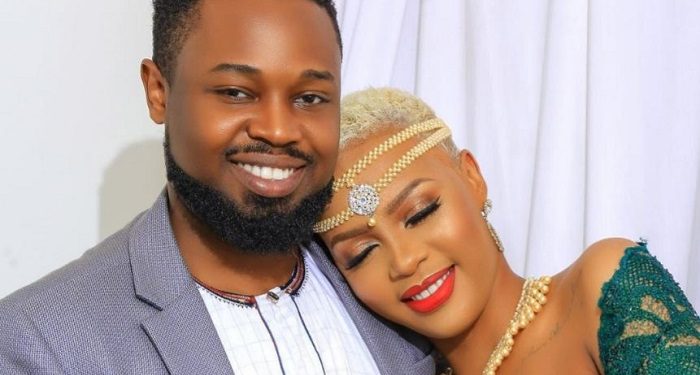 From their shocking introduction photos to their hit song Andeleya, social media in laws are invested in the Daddy Andre-Nina Roz love story. While many wish them the best of luck, a given majority are still stuck with the ‘it will end in tears’ catchphrase.

Yesterday, The Ojambos trended on different social media platforms as many were jubilating that the celebrity couple had broken up.

However, the couple has trashed the rumors. In a phone interview last night, when Daddy Andre was asked to clear the allegations he gave the phone to his wife.

Nina said that she was also shocked by the information disclosed by a blogger on social media about their relationship.

“I also saw those things on social media and I was shocked like you guys but the truth is me and my husband we are still together and we are now home in bed together as you hear us talking. Daddy Andre and we have no plans of dumping each other and there is no single day he has slept without me next to him because we are always together,” said Nina Roz

The break up rumor is said to have been started by Ugandan blogger based in Uk called Ritah Kaggawa.

In her Facebook post Kaggwa claimed that Daddy Andre and Nina Roz called it quits six months after their introduction ceremony.

She said that the two separated some time back, unfollowed each other and even deleted each other’s photos off their Instagram accounts.

Kaggwa further revealed how Daddy Andre is in preparations to hold a fresh ceremony with his new lover based in the USA only identified as Shakira.

Whereas Daddy Andre has indeed unfollowed Nina Roz on Instagram, he hasn’t deleted her pictures from his account.

MP Munyagwa: Museveni is having a good time with NUP being the strongest opposition party