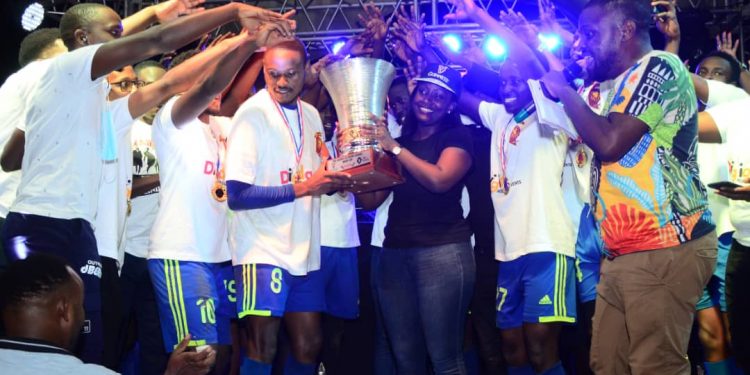 The much-anticipated climax to Season Four of the Budo League came to an exhilarating end at Legend’s Grounds in Lugogo on Sunday.
The 10-aside Guinness sponsored King’s College Budo alumni’s league, which had taken a hiatus due to the Covid-19 pandemic resumed after government gave a green light to sporting events.

The finale was a display of soccer prowess that saw crowd favourites Thazoballo take on Peaky Blinders in the first round of the semi-finals, with the Peaky Blinders coming out victors with a 3-1 win to book a date in the finals. The other main cup semi-final saw Centurions going head-to-head with the Accumulators, and the Accumulators winning the game 1-0 and bagging themselves in a spot in the final.

The second tier semi-finals saw Takoradi triumph over Quaballo with a 4-1 victory in the first game of the George Ssemivule Cup while Abachuba came out victors against Massape in the other game bagging 5 goals to 1.
Speaking at the event, Elizabeth Mutamuliza, the Premium Beers Brand Manager at Uganda Breweries remarked that Guinness and football are the perfect match, hence the brand’s commitment to supporting to the beautiful game.

“Our commitment to football is unwavering. We are the broadcast partners of the world’s most popular football league on Supersport, ensuring that we bring the action live on your TV screen wherever you are,” she said.
“Guinness is now focusing on fans’ involvement in the beautiful game; hence activities like Guinness Night Football and partnerships with several Old Students’ football leagues like the Budo League,” she added.

Mutamuliza added that activities like the Budo League offer an opportunity for the brand to directly interact with consumers.
The event also had an exhibition match between Ntare Lions select side and the Budo League select side that saw the hosts Budo thrash Ntare in a 1-0 victory.

This was followed by a match between SMACK league which beat the Budo league select team 3-1.
At the end of the evening, The Peaky Blinders took home bragging rights after beating Accumulators 2-0 in the finals, and they were crowned Season Four champions of the Budo League.

Nubian Li, Eddie Mutwe and NUP supporters sent back to prison after bail officers fail to show up

Nubian Li, Eddie Mutwe and NUP supporters sent back to prison after bail officers fail to show up