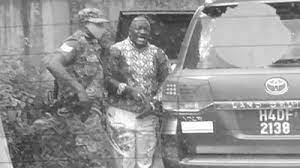 Following the failed assassination, the General’s bodyguard Sgt Khalid Koboyoit who survived the incident with no injuries and also saved Katumba’s life has for the first time given an account of the events that transpired during the attack.

According to his interview with Daily Monitor, Sgt Khalid said when they were first hit, he thought something had rammed into their car and within seconds the driver had been hit and so was Brenda, Gen Katumba then ducked below his seat.

“I just heard some sounds and I asked myself what is happening to our car, already my driver had been shot. The bullets came very fast. The rapid shots brought the car to a sudden halt, that is when I knew they were shooting at us,” Sgt Khalid said.

Sgt Khalid narrated that at that point he picked up his gun and got out only to see  behind him another motorcycle approaching them, lifting the gun to shoot at them.

“They were two motorcycles but they had given themselves a distance. So when I shot those behind, they turned very fast and left. That moment I didn’t know whether mzee (Katumba) was still alive or not. I came to realize that mzee was alive when he opened for himself the car door,” said Sgt Khalid.

At the time of the attack, Sgt Khalid was seated in the co driver’s seat.  He stated that the shooters targeted most of the bullets on the right side of the vehicle because it had stopped near a perimeter wall limiting access to the side where they managed to take cover.

He narrated that some bullets penetrated the vehicle through the behind wind screen. The motorcycle then proceeded ahead of them and parked  a distance.

He added, “The assailant then retreated. I didn’t want to put myself in the open because I didn’t know if the motorcycle behind had gone or would come back. He came for the second time and again I fired so when I went to the other side to get a target he jumped on the boda boda and they left.

Khalid says he then hid the Gen. Katumba  in a makeshift for fear of the assailants regrouping and returning with much force.

“I was still watching the situation, mzee (Katumba) then came from where I had hid him and that is when we jumped on a boda boda and headed to a nearby clinic, “ said Khalid