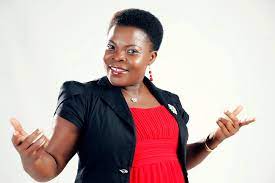 From covering Parliament as a journalist, hosting the People’s Parliament to becoming a Member of Parliament and now a cabinet Minister, Hon. Agnes Nandutu’s appointment as the State Minister for Karamoja affairs excited many.

The Bududa Woman MP and former NTV news reporter says that even though she thinks the President has been watching her work, her appointment as Minister shocked her.

“I was at home relaxed when the news came that I was in the cabinet list. I was shocked, still in shock & composing myself to meet the task. I think it’s now true. I will visit Karamoja soon to discuss with leaders how we can end the issue of street children,” said Hon. Nandutu.

When asked about her plans for Karamoja, Hon Nandutu said that she is going to work together with the leaders of Karamoja.

“As a journalist, I have been to Karamoja region before and I know the challenges they face but I can’t say I know it’s challenges  more than its leaders , the region is endowed with minerals, I have seen its leaders in Parliament, they are focused we shall work together,” said Hon. Nandutu

Hon. Nandutu was a senior political reporter at NTV, she was also a moderator and the Speaker for the NTV Citizen Debate show called The People’s Parliament.  However it was her scripting and narrations of a popular satire show segment called Point Blank that won her fans all over the country.