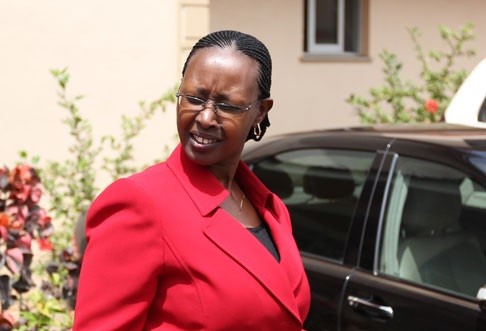 As the law requires that before new ministers are sworn in, they must appear before the appointments committee of Parliament chaired by the Speaker of Parliament for approval on whether they are worthy to hold a public office.

The rejected Presidential appointee is former State House aid, Alice Kaboyo. Kaboyo’s appointment as the Minister of state in the office of the Prime Minister for Luwero Triangle was rejected by the appointment committee based on the June 2012 corruption case when the Anti-corruption court convicted her.

In 2012, Kaboyo was co accused with three former Health ministers Jim Muhwezi and his deputies Mike Mukula  and Dr. Alex Kamugisha. She pleaded guilty to some of the counts in the Global Alliance for Vaccines and Immunisation (GAVI) Case that included abuse of office and writing documents in the name of the former private principal Presidential Secretary Amelia Kyambadde.

Upon conviction, Kaboyo was given two choices to either pay a fine of Shs20m or face imprisonment for a period of up to eight years. She opted for a Sh20m fine settlement, represented by the late city lawyer Bob Kasango.

20 Members of the committee voted against Kaboyo’s endorsement  citing the Anti-Corruption Act which prohibits convicts from serving in a public office for a period of 10 years upon conviction  while two members voted in favor of Kaboyo and others abstained from the vote meaning they neither  voted no nor yes.