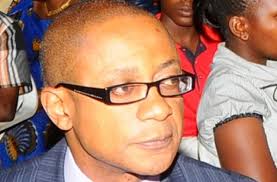 Former Busiro South Member of Parliament (MP) Peter Ssematimba is battling a child custody case with his former house girl.
In a viral video released by Bukedde TV, a lady identified as Joan Namatovu is claiming to be Ssematimba’s baby mama. Namatovu says the renowned Pastor fathered her child and now wants to take full custody of her 10year old child.

Namatovu says Ssematimba’s mother took her to work as a maid in her son’s home in 2005. She further explained that her boss used to have sex with her and after two years she got pregnant.
“My name is Joan Namatovu, I am here to inform you that I was working as a house girl for Peter Ssematimba and he impregnated me, I gave birth and started looking after my child. He now wants the full custody of my 10 year old kid yet I am the one that has raised the kid,” Namatovu said.

Namatovu added that she can’t let her ten year old daughter live with Ssematimba because he changes women everyday and those women might harm her kid.

“I can not let my child live in Ssematimba’s house because he keeps changing women and I don’t want my daughter to get bewitched,” a teary Namatovu lamented.

UNEB postpones release of 2020 examination results due to lockdown

UNEB postpones release of 2020 examination results due to lockdown