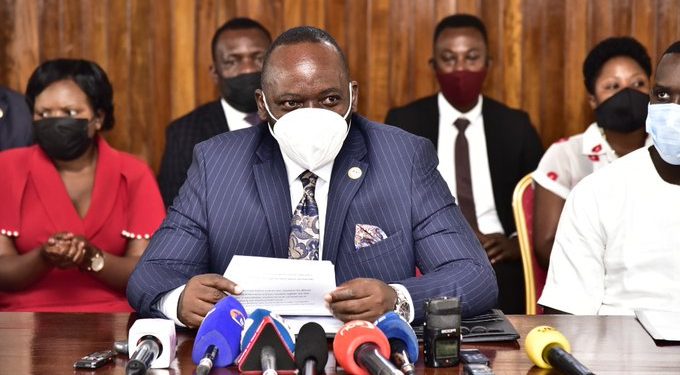 Opposition Members of Parliament led by Leader of Opposition Hon Mathias Mpuuga have asked government to ensure that the money it intends to distribute to vulnerable Ugandans in Kampala and Wakiso during the 42-days COVID-19 lockdown is appropriated through parliament to avoid mismanagement.

Mpuuga said that billions of money were mismanaged by the officials and they demand for transparent accountability.

“If they mismanaged food relief then what about hard cash? Parliament and other local council leaders have to be actively involved this time round,” said Mpuuga.

On Sunday, Prime Minister Robina Nabbanja announced that government will not be giving out food but rather send Mobile Money and vouchers to the urban poor. She revealed that they will use the NIRA statistics to identify them.  The National Taskforce held a meeting yesterday to decide on how much each individual will get but no official communication has been made yet.

Meanwhile MPs also want government to scrap the new taxes on fuel and rent to enable Ugandans access better health care and other basic amenities during the pandemic.

They also want government to allow Kampala City traders to access their shops and pick some money.

“We are receiving reports that traders especially in Kampala that the lockdown was announced at 10:00 PM on Friday and it immediately began to bite. The traders were never given an opportunity to open their business premises to access what they call their backup resources,” said Mpuuga.

KCCA wants Gov’t to send Shs252,000 to each vulnerable person