“Gov’t will only pay Busoga University’s Shs15b debt after establishing what the money was used for,” says Museveni 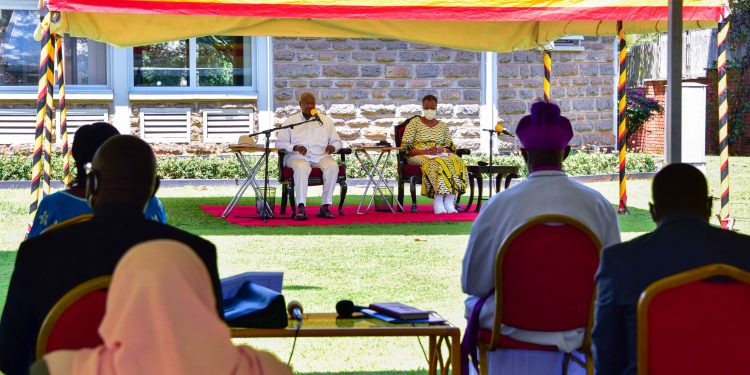 Over the weekend government finalised the takeover of defunct Busoga University after reaching an agreement with Busoga diocese to hand over the institution and its assets to become a public university.

The board of trustees of Busoga University had in February this year signed a first memorandum of understanding with government for a smooth takeover of the defunct institution.

The ten member board of trustees also handed over 300 acres of land to government, assets that include buildings worth Shs21 billion to government.

President Yoweri Museveni announced the takeover where he revealed that government has ‘inherited’ Shs15 billion loan and all university land and also disclosed that the court case has been withdrawn without any costs to both parties.

“After a series of meetings, the government has agreed to take over Busoga University as a public institution with its Shs15b loan. We shall pay the loan when we know what the money was used for and If this money was spent on public efforts,” said Museveni.

He explained that the NRM policy is to have a public university in the original 18 colonial zones of Uganda.

“In Busoga, we are going to build a public university there (Namasagali). As that happens, the idea of taking over this private university is a good one,” he said.

In December 2016, NCHE revoked the provisional license of Busoga University, which has been operation since 1998 on a number of grounds.

NCHE accused the University of Awarding Fake Degrees, which prompted it to cancel more than 1,000 degrees awarded to students, recruiting unqualified academic staff and accumulated debts among others contrary to the Universities and Other Tertiary Intuitions Act.

At the time of the closure, Busoga University was highly indebted and lacked funds to sustain the daily operational costs of the institution. The university was operating under the control of Busoga Diocese at the time of closure.

Dr. Ekwaro Obuku advises Gov’t to take back the pickups to Toyota for refund and the money be used to buy testing kits

Dr. Ekwaro Obuku advises Gov't to take back the pickups to Toyota for refund and the money be used to buy testing kits