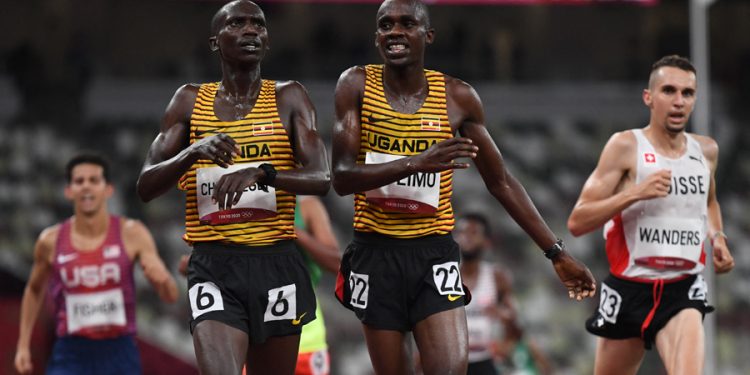 Uganda’s trio Oscar Chelimo, Joshua Cheptegei and Jacob Kiplimo will today make a gasp attempt to more medals at the Olympics as they take part in the men’s 5000m finals. The final is scheduled to start at 3pm.

The race will have 16 participants with world record holder in the distance Cheptegei tipped to run away with gold. He qualified for the final after finishing fifth in Heat 2 after posting 13.30.61. After settling for silver in the 10,000m, he stated that he’s still dreaming of an Olympic gold medal.

Kiplimo is one fellow that poses threat to Cheptegei’s shot at greatness as he will also be aiming for glory. He finished fourth in Heat 2 after posting 13.30.40.  His personal best in the distance is 12:48.63 while his season best stands at 12:55.60.

“The 5000m race will be tough, but we are going to try our best. We have a lot of hope,” Kiplimo said in an interview yesterday.

Chelimo is little known by many Ugandans but he is one youngster who has potential. On his Olympics debut, he raced in Heat 1 and finished fourth. He posted 13:39.07. He’s a junior world cross-country bronze medalist. He is Kiplimo’s young brother.

The trio will have to watch out for Canada’s Ahmed Mohammed, Kimeli Nicholas Kipkorir from Kenya and Ethiopia’s Mengesha Milkesa.

End of an Era: Lionel Messi to leave FC Barcelona

If Chemutai did it…….. Nanyondo hoping for podium finish in 1,500m final today