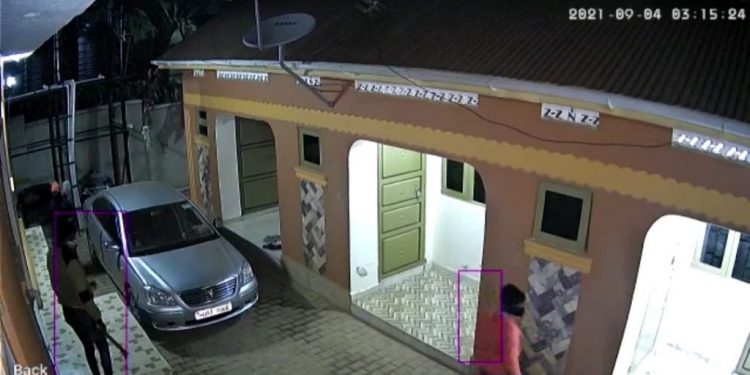 Social media platforms have today been a wash with a video of a group of thugs armed with Pangas and breaking implements attempting to attack a home in Nansana Municipality, Wakiso District.

The CCTV footage captured the machete-welding men at about 3:15 am inside a residence in Kibwa, Nabweru in Nansana municipality moving with pangas and small lights with their heads covered with head socks and face masks.

According to Police, the footage made them contact various officers in charge of the different police stations, under Nansana Division to establish if such an incident occurred and whether any of them had received any such information.

“It was however established that no such incident had been reported anywhere with in the division.

Owoyesigire explained that following investigations, it has been established that a group of four men armed with pangas and breaking implements jumped over the perimeter fence and accessed the premises of Paul Kayemba in Kibwa, Nansana Municipality.

“The premises have 11 residential rooms and have CCTV installed in the compound and at the gate. As soon as they were in the compound, an alarm system alerted the residents who also made a verbal alarm prompting the thugs to take off.

It was further been established that the small gate which also gives access to the premises had not been locked and the thugs used the small gate to run away,” said Owoyesigire.

He added, “It is also not true that the police were informed of the incident as social media reports the victims themselves admit they didn’t inform the police.
They only tried to call the area defense secretary, but their repeated call went unanswered.”

Owoyesigire said no property was stolen and no person was harmed as the thugs took off having sensed that their presence had been detected.

“Efforts are underway to have the suspects arrested and prosecuted. We also want to advise members of the public to remain vigilant and report any such incidents through calling their nearest police stations,” he said.