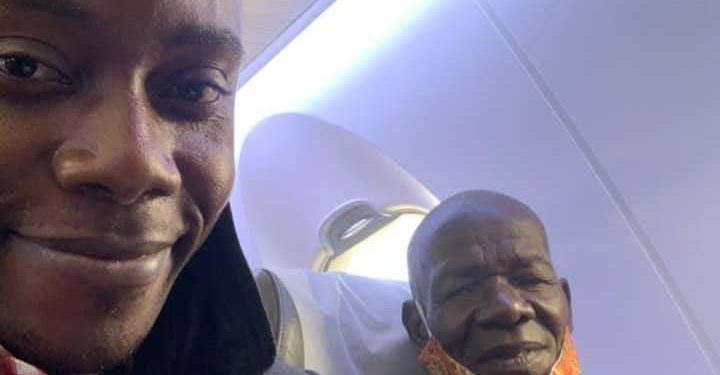 Good deeds are always rewarded, 24 years later, a man has surprised a good Samaritan with a free flight to Nairobi. On September 12, 2021, Henry Mutebe fulfilled one of Wilson Dhabangi’s wishes.

According to Mutebi, 74-year-old Dhabangi used to visit him at school when his mother couldn’t visit him.

“Today (Sunday 12th) at 7am, a Uganda Airlines plane flight No UR202 left Entebbe enroute Nairobi, on board, someone special- a 74-year-old man called Wilson Dhabangi. This is why you should know about him.

In 1996, I lost my father. As such, my mother had to work double to sustain us. Sometimes she spent weeks away from home. To be sure that I was getting a good education, she decided to take me to Namalemba Boarding Primary school- then a very powerful school along Tirinyi-Mbale road in Eastern Uganda. Unfortunately, many times, she never had the opportunity to come visit me,” Mutebe narrated.

He also stated that Dhabangi then 50 years old used to ride a bicycle boda boda (bicycle that carries passengers for pay).

“One day this man learnt that my mother had been away for too long…and yet I was at school. He decided to come and visit me. We were not related…but he was and is a good man. The first Sunday, he visited me became the beginning of many more visits that stretched over three years. He was old, wore worn-out slippers, had no shoes, and wore the same shirt. All the children at school knew him as my father. Some children would bully me that ‘your father is old and rides a bicycle.’ When someone wanted to pick on me, that was the line. I was that kid from a poor family who is visited by an old man wearing tired slippers, an old torn shirt, and an old bicycle,” said Mutebe.

Dhabanga visited him every Sunday for as long as school was open adding that it was roughly over 100 Sundays over between 1997-1999.

“I do not remember any Sunday he did not come to visit me. It did not matter whether it rained or not…whether he was sick or well. He would ride his bicycle and come visit me.Sometimes he carried a half kilo of ground nuts prepared by his wife, other days he simply came to talk to me. The distance between our home and our school was about 3 hours by bicycle. It was a rough road with many broken culverts/bridges. When it rained a lot, sometimes the raging running water would overrun the culvert, carry away the stones and soil…and cross. Still, Dhabangi would find a way to cross that water and come visit me. One time water almost took him. He was saved by some boys who were fishing,” said Mutebe.

According to Mutebe, Dhabangi did not get a formal education but got a better education- Life education.

“Every time he came to school, he would always advise me to ‘read hard’ and not ‘eat the seed.’ I remember in 1997, he told me that if I don’t read hard, I would end up like him and suffer.He told me that if I worked hard and listened to teachers, I would fly in planes and travel to different places. He said if I succeeded, then even people like him who never got an education would perhaps have an opportunity to fly. For whatever reason, he always emphasized the issue of flying.

Fast forward, I completed primary seven in 1999. Unfortunately, he lost his sight. I felt so bad. Fortunately, some good Samaritans (doctors) conducted a medical procedure that restored his sight,” states Mutebe.

He also said that for years he has felt a debt in his heart for the love this man gave him.

“I wanted to give him a surprise. For the last one year, I have been saving money to make this happen.This week, I managed to get an air ticket for him and another special woman who helped us when our mother was away- her name is Rebecca.

Wilson had never even been to the airport before. He told me that the only plane he has ever seen was that of the former president Iddi Amin which came to a village near his home in 1974. So, a plane is something that always fascinated him. I knew this would be something that he would love,” he narrated.

Mutebe says he has been secretly planning a trip for these two people- Dhabangi and Rebecca to thank them.

“Yesterday, every piece fell into place and I managed to get them from the village without them knowing where we are going. I had succeeded in keeping my surprise until I realized there was no way a PCR test was going to be done without them asking. So, I finally broke the news. Wilson cried. My heart sunk.

At his age, he had retired…lives a quiet life, and did not have much hope about anything. So, this came as a surprise.
Today at 8am, in what felt like a movie, we lifted off to Nairobi aboard Uganda airlines,” he said.

He also revealed how the Uganda Airlines pilot made the experience memorable.

“The pilot came over…thanked them…and said he had been inspired by their story. We set off for Nairobi. After we hit the skies, the Pilot again narrates my story with Wilson and Rebecca…and dedicates the flight to them. I can’t explain to you how overjoyed I was that Uganda airlines made this a special experience for me, Wilson and Rebecca,” he states.

He said, “I have looked to this day for years…the day I would put this man and Rebecca (I call her Aunt Becca) in the sky…and fulfill my promise to them which I made when I was young. I told them that one day, we shall fly together in an airplane. I am glad that life has given me the blessing to achieve this dream,”

They will be spending the night in Nairobi- Kenya.

Court rules: Investigate the corruption case against Opiyo within seven days or terminate the charges