Incidences of crime by motorcycle riders on the rise 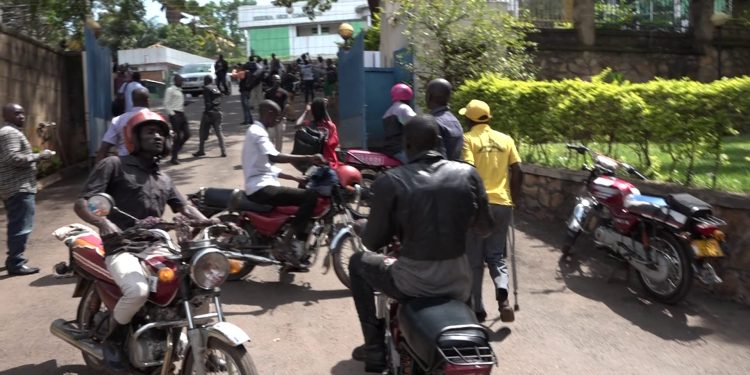 Police has reported an increase in the incidences of crimes perpetrated by cyclists, some in broad day light.

Police says a joint security team has conducted a review and confirmed with concern that there is a dramatic spike in aggravated robberies of bodabodas and the subsequent murders of the riders.

Fred Enanga, the police spokesperson says that during the week under review, a total of 6 murders, related to bodabodas occurred.

For instance, on the 4.09.2021, police in Kalungu registered a case of disappearance of a businessman, that turned out into an aggravated robbery and murder. The victim, Masengere Vincent, a 35 year old, businessman of Miteete village, Kyambala Parish, Bukulula Sub-county, Kalungu District, was last seen on the 31.08.2021, after he had hired a motorcycle, Bajaj Boxer, red in colour, under registration number UER410R, from Segawa Michael.

He rod and proceeded to the bank, at Masaka, where he withdrew Ugx 10m, for their village association. The victim was not seen till the 4.09.2021 when his body was discovered with deep cut wounds, on the head, at Kabale Bugonzi. The motorcycle was also abandoned near the scene, giving a clear motive of theft of cash.

Another incident happened on 7.09.2021 at around 2.56pm, the police at Katugo, registered a murder case of a suspected bodaboda rider, after the body was found abandoned at Katugo Forest Reserve, Katugo village, Katugo Town Council, Nakasongola district.

The body had no documents to help in identification, but was dressed in a blue pair of jeans, a white Tshirt, and white canvas. Upon examination he had a deep stab wound at the left side of the neck, indicating how he was attacked from the back. At the scene, an empty toolbox bag, a wire lock, a black Kavera with consumables. The motorcycle he was riding was missing.

Again on the 11.09.2021 at around 9am, the body of Mukasa Joseph a 40 year old bodaboda rider, of Kibuloka stage and resident of Kijjabwemi LC1, Kimanya Kabonero division, Masaka district, was found abandoned in a bush, in Kyabumba village, Buwinga sub-county, Masaka district. An exhibit of a hammer was recovered at the scene and his motorcycle robbed.

On the same day of 11.09.2021 at around 11:40am, a case of disappearance of Mawanda Kuzaifu, a 20 year old bodaboda ride at Kyabakuza stage and resident of Buda village, Kibengo sub-county, Bukomansimbi district was reported at Kyabakuza Police Station. His body was later recovered from Kyabumba LCI, Buwunga sub-county, Masaka district, in the bush. And his motorcycle, a Bajaj boxer numberless, robbed.

On the 10.09.2021, two other bodies of bodaboda riders were found in Matiri Forest Reserve, in Kyenjojo district. These included the body of Kyaligonza Patrick, a bodaboda of Kagadi road stage and resident of Kirogo LCI. The body was dumped in the forest and motorcycle registration number UFA559C, robbed from him. In addition, the body of another bodaboda rider, indentified as Aliguma Monday alias James, a 22 year old bodaboda rider of Kirogo LCI was also recovered at Matri Forest. The victim was hacked to death and his Motorcycle registration number UFD 231B, Bajaj red in colour, robbed.

“In addition on bodabodas are slowly creeping back, after a hard crackdown on the notorious criminal gangs in 2018. This was followed by another crackdown on Chop Shops dealing in motorcycle spares in 2020. We have again dispatched our task teams under crime intelligence to Kalungu, Masaka and Kyenjojo which are hotspots for bodaboda thefts,” says Enanga.

Enanga urges all bodaboda riders to avoid highly risky trips, especially over long distances, isolated areas and riding during ordinary hours. He also calls for an increased level of vigilance to help counter such senseless attacks against the bodaboda sector.