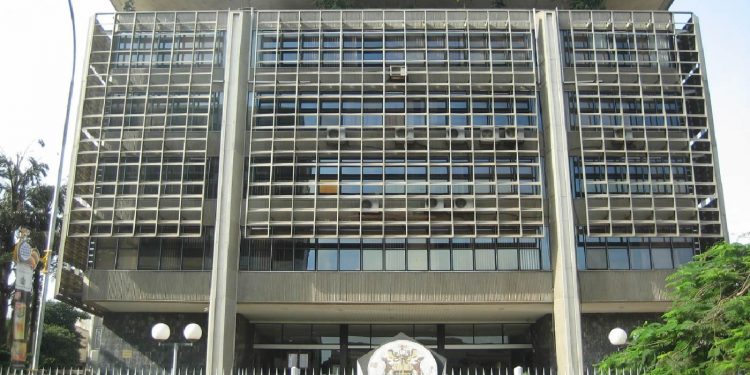 In a landmark ruling by the Constitutional Court, Bank of Uganda has lost immunity against legal proceedings and it can now be sued. Previously, BoU was protected by Section 124 of the Financial Institutions Act which stated that; “No suit or other legal proceedings shall lie against the Central Bank or any officer, employee or agent of the Central Bank for anything, which is done or is intended to be done in good faith under this Act.”

“The general principle of law is that a party must be given an opportunity to be heard before his rights are prejudiced or affected by another’s decision. No one, not even the BOU can be shielded from being answerable to the dictates of justice,” an August 26th ruling by Justices of the Constitutional Court including Muzamiru Kibeedi, Frederick Egonda – Ntende, Elizabeth Musoke, Cheborion Barishaki and Irene Mulyagonja stated.

The ruling arose from a 2013 Constitutional Court petition by Peter Ssajjabi and Swift Commercial Establishment against the Attorney General and Bank of Uganda. The petitioners challenged the Constitutionality of certain Acts of Parliament and whether they are in contravention of the Constitution.

The ruling emanates from incidents that happened in September 2012 when Sajjabi under police investigation for suspected commission of offences including illicit enrichment, conspiracy to defraud and causing financial loss. He was suspected to have been involved in a corruption scandal involving payment of money to questionable beneficiaries of the East African Community who were entitled to Pension by Ministry of Public Service.

Sajjabi is a shareholder and director in the second petitioner Swift Commercial Establishment that wasn’t involved in the pension scandal but suffered when its bank accounts were frozen on orders of BoU because of connection to Sajjabi.

Section 118 of the FIA gives powers to BoU to direct Financial Institutions to freeze accounts if it has reason to believe those funds were proceeds of crime, and the financial institution is not held liable for this action.

The judges faulted these provisions in the FIA. “When read together, Sections 118 and 124 of the FIA make it impossible for a person aggrieved by the act of the BOU directing the freezing of his bank accounts to bring an action challenging the propriety of the freezing order. This is potentially problematic. For example, assume the BOU directs for the freezing of A, a company’s bank account pursuant to Section 118 of the FIA. The BOU insists that its directives against A were done in good faith. It turns out that the freezing order against A was made because of its connection with B who is suspected of corruption. B is actually a minority shareholder in A yet freezing its bank accounts will impede the proper functioning of A to the benefit of the other shareholders,” the judgement reads in part.

The judges ruled that this gives unjustified and arbitrary protection to the BOU, which is contrary to Article 21 (1) of the Constitution which provides that all persons are equal before and under the law in all spheres of political, economic, social and cultural life and in every other respect and shall enjoy equal protection of the law.

“Given that, the BOU’s directives to freeze a person’s accounts have a bearing on the constitutional right to property, it is vital in safeguarding those rights that the courts retain the power to scrutinize the actions of Bank of Uganda on their merits. This will ensure, not only that freezing orders are not unjustly made but also that the BOU’s receives equal treatment as other persons who in similar circumstances will be amenable to legal proceedings.”

“The Petition succeeds regarding sections 118 and 124 of the FIA which when read together have an unconstitutional effect in that the provisions empower the 20 BOU to make directives for the freezing of bank accounts yet subsequently such directives cannot be subject to Court scrutiny for purposes of determining whether they are justified. This is unconstitutional in that it denies the account holders access to court and shields the BOU from scrutiny in Court proceedings. The sections give the BOU favorable and unequal treatment which 25 is contrary to Article 21 (1) of the Constitution,” the judges ruled.