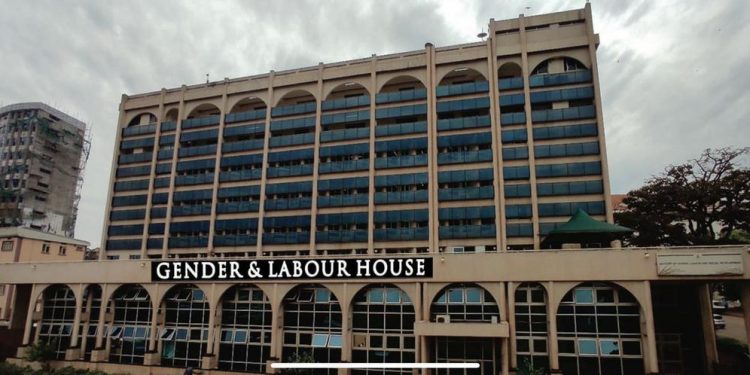 Bank of Uganda has defended Equity Bank’s decision to sell Simbamanyo House and Afrique Suites in 2020, as details indicate the properties’ proprietor Peter Kamya had been collecting rent on the properties but hadn’t been meeting his loan obligations to the bank since 2016.

“From 2016 to September 2020,  Kamya continued to receive from the mortgaged properties without considering paying back the loan but instead chose to ignore the agreement as he opted for legal means even with reminders no payment came through,” reads a BoU report on the matter.

BoU was responding to President Yoweri Museveni’s letter dated September 3, where he asked the Central bank to investigate the sale of Kamya’s properties. After unsuccessful pleading to court to overturn the sale, Kamya ran to Museveni claiming  his properties had been sold illegally.

The report indicates that between 2012-2014, Kamya’s estate took a loan in excess of $7.1m before interest and secured the said facilities by mortgaging  Simbamanyo House and Afrique Suites in Mutungo.

In 2016 Simbamanyo defaulted on those loan facilities and to buy time filed  a court case alleging that his accounts had been wrongly debited and therefore, refused to make any further payments of its loan obligations. The report further says an independent report was undertaken by Ernest and Young showed that the discrepancy was a total of only $442.

In October 2017, Justice Billy Kainamura issued a ruling in accordance with the mortgage property Act, ordering Simbamanyo to deposit 30 per cent of the outstanding loan amount otherwise Equity Bank Uganda Limited would be at liberty to sale of the mortgage properties at a public auction after 30 days.

The report explains that in November 2017, Simbamanyo did not appeal against the ruling of Justice Kainamura but instead filed a Constitutional petition No.42 of 2017 Simbamanyo vs Attorney General and Equity bank Uganda Limited before the Constitutional Court challenging the legality of the ruling 13 of the Mortgage Regulations 2013 (The regulation which requires defaulting mortgagors to deposit 30 per cent of the outstanding loan before they can stop a public auction pf the securities.

On June 4, 2020, Equity Bank Uganda Limited issued a notice of default to Simbamanyo for its failure to service its loan obligations and declared its intention to foreclose and recover the loan obligations.

On June 24, 2020, in response to the notice of default, Simbamanyo set down Miscellaneous Application No. 394 of 2021 seeking for a temporary injunction stopping Equity Bank Uganda Limited from foreclosing on the mortgaged properties.

The report indicates that, on August 13, 2020, Simbamanyo filed an application asking court to stop the proposed sale by public auction of the mortgaged properties by Equity Bank Uganda Limited.

On September 2, 2020, the High Court Registrar issued its ruling and granted the application for interim stay on condition that Simbamanyo pays 30% of the outstanding loan amount of $10.5m.

According to the report, on September 7,2020 the High Court upheld the ruling of the Registrar save that Simbamanyo was ordered to pay the 30 per cent of the outstanding loan amount on or before October 7, 2020.

On September 8, 2020, in accordance with the Mortgage Act, Equity Bank Uganda Limited through its auctioneers CL Risk Management Limited advertised the mortgaged properties for sale and informed the general public that the properties would be sold to the highest bidder on October 8, 2021 if Simbamanyo did not deposit the 30% of the outstanding loan amount as ordered by the court.

On October 6, 2020, The High Court judge issued his ruling in the consolidate Miscellaneous Application Nos.719 and 720 of 2020 dismissing both applications. “Essentially the judge upheld the ruling of the Registrar that had ordered that Simbamanyo should pay 30% of the outstanding loan amounts within 30 days of the date of his earlier ruling of September 6, 2020 otherwise the mortgaged property would be sold”.

By October 8, 2020, Simbamanyo had not deposited the said 30 per cent as ordered by the court. In the absence of any further orders from court stopping the auction, the mortgaged properties were sold after a public auction, in accordance with provisions of the Mortgage Act and the Mortgage Regulations to the highest bidders.

“It is important to note that this sale by public auction, as required by the Mortgage Act took place on October 8, 2020 within the six months period after the valuation report was made on July 4, 2020. The properties were also sold at prices above their forced sale value to Meera and Luwaluwa who were then registered on the same properties as the new owners”

“Simbamanyo and Peter Kamya (“Kamya”) not being satisfied with the sale filed a new suit against Equity Bank Uganda Limited, Meera, Luwaluwa and the Commissioner Land Registration (“the Commissioner”) alleging among other things that the sale was wrongful, the property was undervalued and praying that the transfer be reversed.

Simbamanyo and Kamya also filed Miscellaneous Application seeking for a temporary injunction to reverse the sale of the mortgaged properties pending the hearing of the new suit HCCS No 837 of 2020.

On December 17, 2020, High Court issued a ruling dismissing Simbamanyo’s application under Miscellaneous Application No.445 of 2020 which had been seeking to strike out the Written Statement of Defence filed by Equity Bank Uganda Limited and Equity Bank Kenya Limited and ruled that the main suit HCCS nO.198 of 2020 should be heard on its full merit. This original suit, HCCS No. 2020, is still ongoing and is next coming up for hearing in the Commercial Court this September.

On December 20, 2020, High Court issued a ruling refusing to grant Simbamanyo’s request for a temporary injunction under Miscellaneous Application No. of 2020, that the sale, transfer and registration of mortgaged properties into the names of Meera and Luwaluwa be reversed pending the hearing of HCCS No.837 of 2020.

On January 7, 2021, Simbamanyo also filed a notice of Appeal against the ruling of the learned Registrar refusing to reverse the sale and transfer of the mortgaged properties. This appeal is yet to be heard by Court of Appeal.

On February 17, 2021, Simbamanyo’s suit against Equity Bank Uganda Limited, Meera, Luwaluwa and the Commissioner, HCCS No.837 of 2020, abated because Simbamanyo did not file summons for direction in time and was dismissed.

The report further shows that on February 21, 2021, Simbamanyo and Kamya appealed against this abatement to a judge of the High Court and also appealed for stay of execution pending the hearing of the Appeal but court declined to grant Simbamanyo the stay of execution.

On July 30, 2021, the High Court judge dismissed the appeal that Simbamanyo and Kamya had filed against Abatement with costs.

Dissatisfied with the ruling, on August 3, 2021, Simbamanyo and Kamya filed another suit against Equity Bank Uganda Limited, Meera, Luwaluwa and the Commissioner, HCCS No of 2021, on the same facts raising the same issues contained in the previous suit HCCS No. 837 of 2020 challenging the validity of the sale of the mortgaged properties.

On September 3, President Museveni gave an order to Bank of Uganda (BOU) regarding Equity Bank after receiving  complaint from Kamya and his wife. He told the Governor BoU, Emmanuel Tumusiime Mutebile to investigate circumstances under which Equity sold Simbamanyo House and Afrique Suites.

“They state that whereas Bank of Uganda directed that there should be no foreclosure of mortgaged properties by banks during the covid-19 pandemic, Equity Bank went ahead and sold their properties at very low prices. That they had even offered to get their own buyers but all their attempts were frustrated,’’ Museveni said.

According to Equity however, after the lock down being imposed in March 2020, Simbamanyo proprietor still received rent in June 2020. But, he failed to service his loan.

Vampino reveals why he was arrested in Jamaica, ‘applauds’ Bobi Wine upon release

Vampino reveals why he was arrested in Jamaica, 'applauds' Bobi Wine upon release