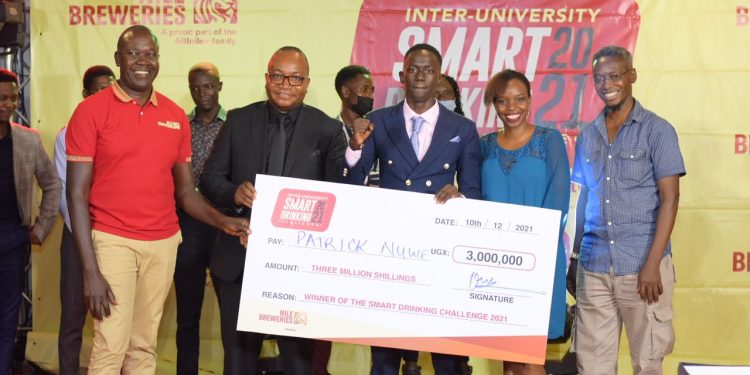 Nile Breweries Limited (NBL) has awarded Shs3 million to Patrick Nuwe Tuhaire who emerged winner of the Inter-University Smart Drinking Challenge in an epic Grand finale where the 15 finalists battled it out at Kabira Hotel, Bukoto.

“We challenged university students across Uganda to submit the best ideas to encourage responsible drinking among youth, and the participants rose to the occasion to address drinking vices in their universities with practical solutions,” said Onapito Ekomoloit, the Legal & Corporate Affairs Director Nile Breweries.

“I congratulate the winner and while they will walk away with prizes, the most critical aspect is that they are now ambassadors of smart drinking,” Onapito said.

Launched in September this year, the inaugural Inter-University Smart Drinking Challenge, was aimed at influencing social norms and individual behaviors, by challenging students to submit the best ideas to encourage responsible behavior among the youth.

This followed recent studies that found high levels of abuse of alcohol and other substances in Uganda universities.
“As Uganda’s beer market leader, we could not idly look on at this negative trend,” Onapito said.

Among the ideas students submitted for the competition were written form, video, graphics, and social media content forms to create winning concepts based on the theme BeSmartDrinkSmart, Beera Mu Classi.

The competition saw students from the five (5) participating universities; Makerere University, Mbarara University of Science & Technology (MUST), Kampala University, Soroti University & Kyambogo University, battle it out throughout the campaign to make it to the top 100, then top 40 and top 15, from among whom emerged the top 3 who battled for the ultimate prize live on NBS TV. A total of 388 students entered the competition.

” I am very proud to have won this challenge and would like to thank my friends, my parents and most importantly, Nile Breweries Limited for believing in university students such as myself to do great things. To the rest of the students, always ensure to Nile your vibe (Be Smart) when drinking,” said Patrick Nuwe Tuhaire (The winner of the challenge).

On behalf of the judges, Dr Innocent Nahabwe, CEO Galaxy FM said, “Youths are future, therefore, need to be made part of the solutions to the challenges in our society such as harmful use of alcohol. The ideas presented today are a testament to this and can go a long way to make changes among our young adults if implemented.”

According to Clare Asiimwe, NBL Sustainability manager and project manager of the campaign, Nile Breweries believes in and shares the UN Sustainable Development Goals’ ambition to reduce the harmful use of alcohol by 10% by 2025.

“We intend to create an interactive forum of champions of the behaviors and social norms that embody Smart Drinking in various universities in the country,” Asiimwe said.

With investment in Smart Drinking activities annually up to at least 200M, some initiatives in the past include, No Excuse, Guidance labeling on bottles, Global Beer Responsible week, road safety programs among others.

“Smart Drinking is part of NBL’s company culture, we continue to strive to bring that culture to communities. NBL would like to make every experience with a beer a positive one and build a company to last for the next 100+ years by motivating AB InBev employees and consumers to engage in Smart Drinking. We are saying, the next time you have a beer, consider the simple – and smart – things you can do — like eating while drinking or before drinking, having plenty of water, pacing yourself, or planning a ride home — to make your experience with the beer a positive one, “Asiimwe added.