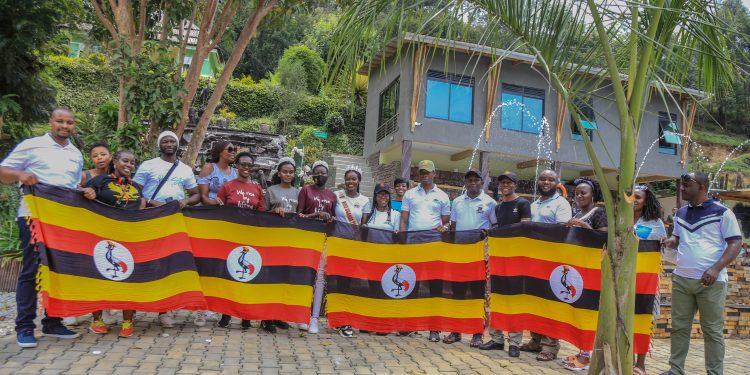 The Minister of State for Tourism, Wildlife and Antiquities, Bahinduka Mugarra Martin has wooed Ugandans to support domestic tourism, as one way of ensuring the sector recovers from the Covid-19 pandemic.

The minister made the call while launching  “My Breathtaking Uganda”, a domestic tourism campaign, which he said is critical in building resilience to international shocks with newly reinstated travel restrictions, adding that it is a major driver of word-of-mouth marketing since most tourists believe travel recommendation from friends and family.

The call was made during the just-concluded independence weekend as the minister led an expedition of 40 domestic tourists on a 3 Lakes, 4 Hotels deep-dive experience to Western Uganda.

Day 1 entailed a group tour of the Equator, Lake Mburo National Park and lunch at the new Lake Mburo Lakeside restaurant in the national park. The group was then treated to a sunrise boat cruise on Lake Mburo before retiring to the Igongo Cultural Centre and Country Hotel.

Day 2 saw the group head to Kabale in South Western Uganda where they spent the night at Birdnest Resort and Bunyonyi Safaris Resort after a tour of the famous Lake Bunyonyi.

For the third day, the expedition, led by the minister and Isaiah Rwanyekiro, the CEO of Breathtaking Uganda head to Kisoro district in the South Western part of the country, where they toured Lake Mutanda in Kisoro, before retiring at Gahiza Island Resort on the lake.

The group also relished the Batwa experience- a unique 2-in-1 cultural/eco-tourism hands-on experience that showcases how the Batwa lived for millennia in the Bwindi Impenetrable forests. The experience includes learning how these people live and hunt tapped medicinal plants from the forests as well as hearing their ancient legends and traditional songs, watch and learning their energetic dances amongst others.

Reigning Miss Uganda, Elizabeth Bagaya, who was part of the team, vowed to use her institution to promote Uganda to the rest of the world.

The minister applauded individual and organisational tourism players that had partnered with Breathtaking Uganda on this particular leg of the campaign including James Tumusiime of Igongo; Charlie Kalyango of Birdnest; Doreen Mulenga of Little Ritz, Kabale and Charlotte Kanabahita of Bunyonyi Safaris Resort. Others are David Bakeine of Gahiza Island on Lake Mutanda in Kisoro; Ivan Batuma Chairman of the Kigezi Tourism Cluster and owner of Bunyonyi Overland Camp; the Uganda Wildlife Authority and Acacia Hotel in Mbarara.

Domestic tourism is the foundation of every destination tourism strategy

The minister reiterated the importance of domestic tourism in sustaining Uganda’s tourism sector, one of the country’s largest foreign income earners that has been stressed by global travel restrictions and uncertainty over the Covi9-a9 pandemic.

“There is no country in the world that has developed its tourism industry by over-relying on foreign tourists,” Mugarra said while urging all able Ugandans to prioritise both touring their country as well as leveraging their networks and social media to spread the news about Uganda’s unrivalled beauty.

Demonstrating the strategic importance of the tourism sector, the minister quoted a recent Ministry study— the Uganda Tourism Expenditure and Motivation Survey 2019 report that showed that every USD1 spent by a tourist in Uganda generates an average of USD2.5 of GDP- both directly and indirectly along the value chain compared to an equivalent of USD 2.3 of GDP generated per USD1 earned from traditional exports.

“If a fraction of each 3 to 4 million Ugandans on social media made it a point to travel from their homes for at least 7 nights a year as well as use their social media to share something good about the locations they are visiting, the impact created both in Destination Uganda awareness as well present and future tourists would be immense,” he explained. He added that subsequently, the investment and jobs created would equally be phenomenal!

Impact of Covid-19 on the tourism sector and moderate recovery

According to a recent tourism sector performance report, by December 2020, Uganda had lost up to 1 million foreign tourist arrivals, translating into a loss in foreign exchange earnings of up to US$ 1.06 billion (UGX 3.91 trillion) in 2020 alone.

However, the industry began picking up by March 2021, aided by especially increased domestic tourism activity as well as the reopening of the borders. Tourism bookings, according to the report, had started recovering from 27,542 bookings recorded by end of August 2020, at the peak of the first Covid-19 wave to 83,464 bookings by the end of March 2021.

It is not yet clear, how the sector was impacted by the second Covid-19 induced 42-day lockdown that started at the end of June 2021.