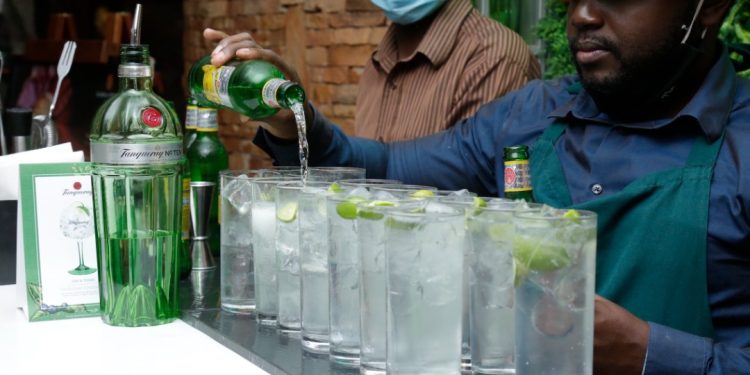 The world never runs out of reasons to celebrate. From big days like New Years’ and Christmas, there is literally something to commemorate each of the 365 days of the year. Today, October 19, is International Gin & Tonic Day. It is the day to celebrate one of the world’s most popular alcoholic mixes.

“Gin and Tonic or G&T like most people like to call it is one of the easiest cocktails to make. It is as simple as mixing gin and Tonic Water. Of course, we recommend Tanqueray, the world’s best gin and Tonic Water,” says Annette Nakiyaga, the International Premium Spirits Brand Manager at UBL.

“Because of its, taste Tanqueray is the Gin & Tonic choice for bartenders across the world,” Nakiyaga says.

Gin & Tonic was introduced by the army of the British East India Company in the early 19th century.  Malaria was a persistent problem and to cure the disease, quinine was drunk in tonic water but the bitter taste was unpleasant. British officers in India took to adding a mixture of water, sugar, lime and gin to the quinine in order to make the drink more palatable, thus gin and tonic was born.

October 19 was chosen as International Gin & Tonic Day to celebrate the life of one of the drink’s biggest fans. It was founded in memory of Mary Edith Keyburn, a remarkable woman who loved Gin & Tonic and passed away on October 19, 2010 at the age of 95.

Tanqueray is the perfect choice for G&T because of its distinctive taste. When Charles Tanqueray first distilled the definitive London Dry gin in 1830, he experimented with some 300 recipes, before arriving at the one, with just four botanicals, (Juniper, Coriander, Angelic Root and Liquorice). It is that recipe that makes Tanqueray the choice for G&T, 190 years after it was first distilled.