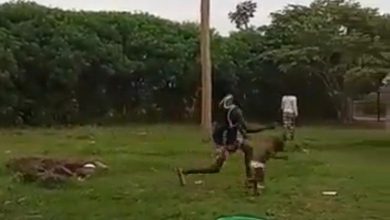 A video of a man assaulting a woman and a child has been making rounds on social media.

The man who has been identified as Tom Galubale has been remanded to prison for assaulting a neighbor and her one-year-old child.

Galubale, a resident of Buwaiswa Ward, Northern Division in Kamuli municipality was last week captured assaulting the two, on a video that has since gone viral on social media.

The video has since caused social media uproar from the public and child protection crusaders. In the clip, Galubale is seen embroiled in a physical altercation with his unidentified female neighbor, who shortly retreats.

As the child crosses Galubale’s path to joining the mother, he (Galubale) unleashes a strong slap on the back of the child’s head that sends the child flying to the ground with a thud.

“The woman he assaulted is his neighbor and not his wife as it is being suggested on social media, while this one-and-a-half-year-old child belongs to the woman; he was taken to Court and remanded,” Kasadha said.

According to him, police are yet to establish what triggered the fight, but whatever it was, he said it wasn’t rational to beat the neighbor, the child, or anyone.

“We condemn Galubale’s actions and I appeal to members of the public to always settle their grievances legally and without engaging in acts of violence, especially where children are involved,” he said.