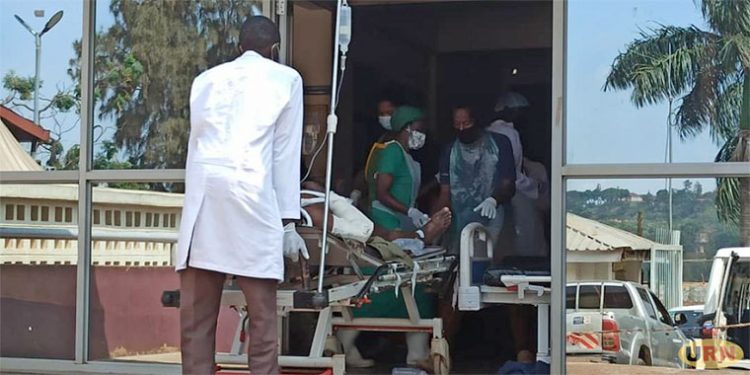 The number of bomb blast victims has shot up to 27, according to Mulago Hospital.

Kampala City has been gripped by terror as double bomb blasts went off in the heart of the city today morning.

According to Mulago, most victims are police officers and the number of those critically injured victims is 7.

“We have so far received 27 causalities, seven of these are in a critical condition,” said Mulago hospital medical personnel.

The number of casualties from the bomb blasts is currently reported to be over 40.

According to KCCA hospital director, Dr. Sarah some of the victims have been stabilized while others have been transferred to Mulago hospital.

“We got about 17 casualties who we managed to stabilize. We have since referred about 12 of these to Mulago and other hospitals while 5 have been sent home,” said Dr Sarah, KCCA hospital.

This roughly brings the total number of victims to over 40.

However, while some people are fighting for their lives in different hospitals, a number of people have succumbed to the blast.

In an interview with NBS, Kampala Central Mayor, Salim Uhuru made a comment on the ongoing events confirming that he has lost a friend in the blast.

“I can confirm that a friend of mine called Katongole has died in this explosion,” said Uhuru.

As Kampala is yet to comprehend the shock and terror of the double blasts, another bomb has been diffused by the Police Bomb squad at Kooki Tower near CPS.