History of terrorist attacks in Uganda 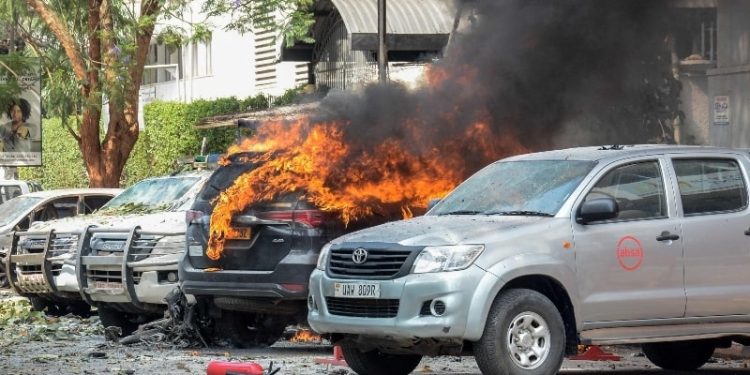 There is deep shock and mourning following yesterday’s twin bomb blasts that killed six people and wounded 36 others in Kampala.

The Islamic State group has claimed responsibility for a twin suicide bombing. However, the government accuses a “domestic terror group” linked to the Allied Democratic Forces (ADF) of the bombings.

Uganda has suffered several terror attacks in the past and the government has always blamed ADF.

ADF is an Islamic extremist terrorist group, which originated in Uganda. They are based in the nearby Democratic Republic of the Congo, however, the government says that they have a domestic terror group within the country.

The most deadly attack in Uganda by the ADF was carried out on June 8, 1998, when they attacked the Uganda Technical College, Kichwamba in Kabarole District, killing 80 students and abducting about 100.

In 1997 another major attack was carried out, when the group threw bombs into taxis and public buildings, killing more than 50 people were killed and wounding about 160 more.

On July 11, 2010, suicide bombings were carried out against crowds watching a screening of the 2010 FIFA World Cup Final match during the World Cup at Kyadondo and Kabalagala. The attacks killed 74 people and wounded 70 more. Al-Shabaab, a jihadist Somali terrorist group, claimed responsibility for the attacks as retaliation for Ugandan support for AMISOM.

After eleven years of relative calm, the ADF targeted Uganda this year with the help of Islamic State-linked terrorists.

On June 1, 2021, General Katumba Wamala was traveling in a vehicle when four gunmen appeared and opened fire, wounding Wamala and killing his driver and his daughter.

A month later, authorities revealed that the attackers were Islamic extremists who were trained in a jihadist camp in North Kivu, Democratic Republic of Congo, and had links with the Allied Democratic Forces and the Islamic State.

On August 27, authorities arrested an ADF member for planning a suicide bombing attack at the funeral of former Deputy IGP Gen Paul Lokech, who was a major figure in the arrest of the group’s members.

On October 8, Islamic State militants bombed a police post in Kawempe; nobody was injured in the attack. It was the first time that the Islamic State claimed responsibility for an attack in Uganda.

On October 14, 2021, the United Kingdom issued a warning of an imminent terrorist attack, calling on their nationals to be extremely vigilant about their security “especially in crowded and public places like hotels, transport hubs, restaurants and bars, and during major gatherings like sporting or religious events.”

At 9 pm on October 23, 2021, a bomb exploded in a bar in Komamboga in Kawempe, a waitress was killed by the blasts while three other people were injured.

Three men, pretending to be customers, brought the bomb into the restaurant in a polythene bag and left it under a table, leaving before it exploded.

Islamic State claimed responsibility, saying they targeted the establishment because it is frequented by government employees.

At 5 pm on October 25, 2021, a suicide bomber blew himself up on a Swift bus in Lungala, Mpigi District, carrying 52 passengers. Three people were wounded in the attack.

A day later, authorities identified him as a member of the Allied Democratic Forces.