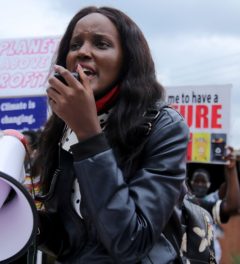 Climate Justice Activist, Vanessa Nakate rose to fame in 2020 when her image was cropped off a photo featuring her and four white activists. Nakate was just from participating in a news conference at the World Economic Forum with four white activists, including the Swedish teenager Greta Thunberg. But when The Associated Press released a picture of the five from the event, Nakate had been cropped out.

“I’m sad because of the people from Africa. It showed how we are valued. It hurt me a lot. It is the worst thing I have ever seen in my life. Leaving #Davos!  Thank you for the memories! Leaving as the strongest climate activist ever! Note: Now I know the definition of racism,” Nakate Posted.

Nakate is a Ugandan Climate Justice activist born on November 15, 1996. The 25- year-old is a graduate of Business Administration from Makerere University Business School.  She was inspired by Greta Thunberg to also start up her climate movement. Greta Tintin Eleonora Ernman Thunberg is a Swedish environmental activist who is known for challenging world leaders to take immediate action for climate change mitigation.

She is the founder of Rise Up Climate Movement, a climate change activism initiative that aims at amplifying the voices of activists from Africa.

Her journey to becoming a Climate activist?

In an Interview with celebrated Actress Angelina Jolie, Nakate revealed that her journey as a Climate Justice Activist began in 2018 when she found out that climate change was one of the biggest threats to humanity.

“In the year 2018, I wanted to do something that could cause a change in the lives of the people in my community. I started to do some research and was surprised to find out that climate change was the biggest threat to humanity. I decided to read about its causes, impacts and that’s when   I realised my country Uganda is affected by the climate crisis,” said Nakate.

As a move to provide solutions to the problems affecting climate, Nakate came up with the Green Schools Project, a renewable energy initiative. She aims at transitioning schools in Uganda to solar energy and installing eco-friendly stoves in these schools. Six schools have so far benefited from this project. These include; Gayaza Church of Uganda Primary School, Bbina Islamic Primary School, and Kyanja Primary School among others.

“Along the way during my activist I decided to start providing solutions and not to just request for justice because I believe many of these communities can’t afford of getting solutions, I decided to start up a project of installation of solar panels and institutional stoves I chose this project because we need a transition to renewable energy and many of these schools are in the rural can’t afford the solar panels. For instance, the stoves reduce the amount of firewood the school uses,” Nakate said.